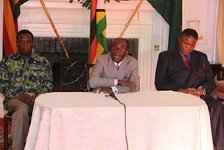 ZIMBABWE – President Mugabe’s passion for education saw him convert three offices at Zimbabwe House into classrooms to help ministers and new commanders in the defence and security forces who had left education mid-stream to join the liberation struggle to finish their studies, a Cabinet minister has revealed.

This passion saw that nascent school morph into the Presidential Scholarship Programme that has benefited over 20 000 students since 1995, and the commissioning of the Nziramasanga Commission of Inquiry into Education and Training whose recommendations have since been adopted by some countries in southern Africa, and informs Government’s current thrust to promote the uptake of Science, Technology, Engineering and Mathematics programmes in schools and colleges.

Many illustrious people in Government benefited from the President’s educational benevolence.

In an interview with Star FM in Harare on Thursday, Information, Media and Broadcasting Services Minister Dr Christopher Mushohwe said top Government officials, including some sitting judges, were beneficiaries of President Mugabe’s passion for education when he was Prime Minister in 1981.

The programme later morphed into the Presidential Scholarship Programme to assit underprivileged, but academically gifted children.

“The President’s passion for education, end of 1981 going into 1982 as the Prime Minister then set up a window of education for the new commanders who had taken up positions in the army, in the police, in the central intelligence organisation and prisons,” said Minister Mushohwe.

“He surrendered three of his offices at Zimbabwe House and converted them into classrooms. Many people do not know this part of President Mugabe.”
Minister Mushohwe said the programme was confidential because at the time the new commanders could not go to public schools because the security situation was unpredictable at the time.

The President, kept his programme under wraps as he did not want people to know that his commenders were in school.
“That really was done under complete secrecy, because then at the time you wouldn’t want people to know that a commander did not have sufficient education, that minister did not have sufficient education,” he said.

“The President gave them that opportunity and most of the people who went through that process have attained degrees, some even went on to get Phds.”
Minster Mushohwe said the ZimHouse school became the precursor for the presidential scholarship programme.

The Presidential Scholarship Programme, which celebrated its 20th anniversary in 2015 having started in 1995, has so far benefited more than 20 000 students.

In a bid to improve the education system, President Mugabe commissioned the Nziramasanga Commission of Inquiry into Education and Training to evaluate the problems that were affecting the education sector and proposals were made to ensure that the education system becomes relevant to the country’s socio-economic needs.

Some of the recommendations put forward by the Nziramasanga Commission include introducing a nine-year compulsory basic education (junior school) cycle for all pupils in order to cultivate habits, attitudes, interests, skills and entrepreneurial opportunities.

The commission also recommended an outcome based curriculum, which is broad based in terms of subject offering and also focuses on learning areas and employment related skills.
At senior school, the commission recommended four interlinked programmes: General (Academic) commercial or business, technical, vocational, technical colleges and trade testing to be conducted at senior school one and two. herald

ZIMBABWE - President Mugabe’s passion for education saw him convert three offices at Zimbabwe House into classrooms to help ministers and new commanders in the defence and security forces who had left education mid-stream to join the liberation struggle ...
Share via
x
More Information
x