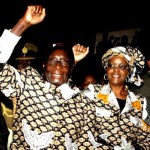 ZIMBABWE – Zimbabwe First Lady Grace Mugabe has blown about US$3 million from her charity account in just under two months in a hectic spending spree, the Zimbabwe Independent has reported.

Statements from her CBZ Bank account number 01124193480011, which was used to source funds for her 50th birthday fundraising dinner held on July 25, show that as of August 1 she had a healthy balance of $2,554,029 out of the $3 million she had raised using her influence as First Lady.

However, the account was stripped of its fat balance through a frantic splurge with a series of withdrawals and transactions which left it with just $35,207 as of Thursday.

Most of the money, $1,750,000 was moved from the account to the Grace Mugabe Children Foundation fund on August 12.

Prior to the major transfer, US$250,000 was withdrawn from the account on July 28, while between July 28 and August 12 a series of transactions and withdrawals were also made.

The $250,000 withdrawn on July 28 was probably the money given to charity organisations by the First Lady at a function held at her orphanage in Mazowe on July 29, although those close to her say some of the money was spent on luxuries.

Mrs Mugabe donated a total of $250,000 to 50 charity organisations countrywide with each organisation receiving $5,000 in cash.

The First Lady raised the cash to support her charity work in the run-up to and during the opulent dinner held at her Blue Roof mansion in Borrowdale Brooke.

Records made available by the organising committee show that there have been a series of deposits and withdrawals from the account since money started flowing in on July 1. The committee was made up of mostly close relatives and the First Family’s trusted friends and not members of charitable organisations.

The Amai Dr Grace Mugabe@50 organising committee, which put together the fundraising dinner, told delegates to donate in cash or kind to charities in which Grace is patron.

In addition to the money in the account, the First Lady also raised cash during the fundraising dinner.

Prophetic Healing and Deliverance Ministries founder Prophet Walter Magaya, for instance, bought a book chronicling the First Lady’s life in pictures for a whopping US$50,000 after he outbid other potential buyers.

Ahead of the fundraising dinner, broke state-owned enterprises and parastatals, which are struggling to pay workers, were asked to support the event.

That the First Lady was able to raise more than US$3 million in less than a month, in a struggling economy characterised by a debilitating liquidity crunch, and massive company closures proves how powerful she has become.

Grace is building an empire in Mazowe where she has seized farms from farmers, companies and villagers to secure land to construct an orphanage, school, dairy and a mansion.

She is set to expand her vast empire amid reports she is planning to build a hotel at Manzou Farm in Mazowe, where she also intends to set up a private game park at the expense of villagers who have been living there since 2000.

According to reliable family sources, Grace, whose new imposing mansion at nearby Mapfeni Farm is all but complete, would engage Chinese contractors to build the hotel. The Chinese have been the major contractors of most of Grace’s properties, including the Amai Mugabe Junior School.

If plans to construct the hotel succeed, it would add to her empire which includes large tracts of land and a very advanced dairy, Gushungo Holdings, which trades as Alpha Omega Dairy (Pvt) Ltd.

The Mugabe family has an imposing mansion, commonly referred to as the “Blue Roof”, in the upmarket Borrowdale Brooke in Harare. In addition, they own multiple farms — as many as 15 — some of which were grabbed from prominent individuals and companies. It also reportedly has overseas properties which include a hotly-disputed £4 million Hong Kong villa.

ZIMBABWE - Zimbabwe First Lady Grace Mugabe has blown about US$3 million from her charity account in just under two months in a hectic spending spree, the Zimbabwe Independent has reported. Statements from her CBZ Bank account number 01124193480011, which ...
Share via
x
More Information