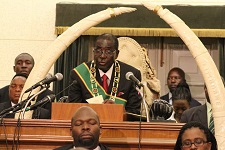 ZIMBABWE – When President Robert Mugabe ploughed through the wrong speech two weeks ago, he did not only waste the country’s time but also cost government thousands of dollars as Parliament had to reconvene the next day.

Parliament had to be recalled for another sitting the following day so that Mugabe’s correct speech could be tabled after the nonagenarian had presented a wrong speech at the opening of the third session of the eighth Parliament of Zimbabwe.

Conservative estimates put the figure at $50 000 of taxpayers’ money, inclusive of sitting allowances and accommodation.

There are 350 members from both houses of Parliament who are entitled to $75 in allowances for every sitting, amounting to about $26 250.

Moreover, most of the legislators and senators also get housed at Harare’s top hotels, which charge over $150 per night, bed and breakfast.

Notwithstanding the price arrangement the government might have with the hotels, Treasury forks out around $30 000 per day for the travel expenses and accommodation for the legislators.

Mugabe repeated the speech he delivered during the State of the Nation Address address last month word for word.

“Mr Speaker Sir, what I expected from the Vice President, the moment he opened his mouth, was for him to apologise to this House and indeed, to the nation, to say we are very sorry.

“Mr Speaker Sir, today I am speaking as a mother and it is important that we understand each other.

“I expected an apology because there are resources involved. Parliament has been recalled today and we are using taxpayer’s money. They would like to know the reason why the House was recalled today,” Khupe said.

“Mr Speaker Sir, I also expected our newspapers to be awash with stories to say no, we are very sorry about what happened and an explanation given.

“There was need to also say heads have already started rolling because of what happened. This is not a small matter by the way, neither is it a laughing matter.

“This is a serious matter which has embarrassed our President and this country, we do not want that.

“I think as a people, we must now change our ways of doing things. So it is important that Mr Speaker Sir, an apology is given.”

ZIMBABWE - When President Robert Mugabe ploughed through the wrong speech two weeks ago, he did not only waste the country's time but also cost government thousands of dollars as Parliament had to reconvene the next day. Parliament had to be recalled for ...
Share via
x
More Information