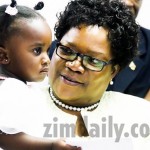 HARARE – THE Mashonaland Central Provincial Election Directorate yesterday rejected Vice President Joice Mujuru’s CV for nomination into the Central Committee saying they did not want to associate with anyone implicated in the plot to assassinate President Mugabe or the spygate saga that saw some MPs work with CIA agent, Eric Little, in their constituencies.

This came as Nicholas Goche, the secretary for transport and welfare in the Politburo, withdrew his Central Committee application in the face of allegations of his involvement in the plot to assassinate President Mugabe.

Elsewhere in the Midlands, the Provincial Elections Directorate also rejected the applications for Central Committee posts by Politburo members Francis Nhema and Flora Buka and passed a vote of no confidence in four other members on allegations of fanning factionalism.

Goche, Buka and Nhema become the latest high-ranking members of the Mujuru cabal to fall by the wayside in the wake of the suspension of party spokesperson Rugare Gumbo, who was recorded saying if President Mugabe blocked VP Mujuru’s ascendance to the party presidency, he will deposed the Kabila way.

DRC president Laurent-Désiré Kabila was assassinated by a member of his security team on January 18, 2001. Goche is accused of plotting to assassinate President Mugabe as part of a plot to install VP Mujuru in his stead. The Politburo recently heard that secretary for administration Didymus Mutasa and suspended party spokesperson Rugare Gumbo said President Mugabe would be shot if he did not allow VP Mujuru to take over at the December Congress. Minister Goche, it is said, approached potential hit men in South Africa and Israel to explore the possibility of the assassination.

He allegedly used the cover of official Government business in Switzerland to make the stop-overs and meet the would-be collaboraters. And at Wild Ox Club and Mteri Lodge on September 7 in Chiredzi, he told Zimbabwe Sugar Cane Millers Union secretary-general Edmore Hwarare that “real war” was coming in the run-up to the Zanu-PF Congress. He said guns would be fired and unnamed people would be flushed down the toilet. “Yamunayo kuno haisi hondo, real war is coming ahead of Congress. Pfuti dzicharira (what you have here is not war, real war is coming, shots will be fired),” he said.

President Mugabe at the weekend questioned Goche over reports that he approached hit men to assassinate him. The President made the remarks as he arrived for a Politburo meeting at the party’s headquarters in Harare where, in line with his tradition before such meetings, he greeted Politburo members individually in the conference room. When he got to Minister Goche, he said: “Ko, ndiwe urikunangirwa huroyi.”

The President then ribbed him with the song: “Ndiwe muroyi ndiwe” – prompting the visibly shaken minister to spring into self-defence mode. Minister Goche denied the allegations and accused The Herald – which, together with The Sunday Mail reported on the matter – of fabrication.

It could not be established at the time of going to press whether Goche’s decision signaled political exit or intention to leave Zanu-PF as it has implications on his brief as Cabinet minister. Goche had to leave the venue in a huff as demonstrating youths accused him of plotting to assassinate President Mugabe. Dokora fell by the wayside after his CV was rejected on the basis that he took Zanu-PF councillors and chairpersons to Mozambique where they conducted meetings on strategies to support VP Mujuru.

The youths said Goche could not become a member of the party’s Central Committee in the wake of the assassination plot in which he is said to have looked for hitmen from Israel and South Africa. When acting provincial chairman Wonder Mashange announced VP Mujuru’s name as one of those who had submmited her name for consideration for the Central Committee, it was received with mixed feelings, with some saying she was no longer fit to continue serving in the party’s top organ.

“The people were saying they could no longer work with the VP considering that she is linked to the activities destabilising the party,” he said. “They said as Mashonaland Central province we are 100 percent behind President Mugabe.” Goche had sneaked out of the meeting at Mayfair Lodge where he intended to submit his application for the Central Committee post without doing so after youths besieged the venue demanding his ouster.

The youths led by Mashonaland Central youth league chairman Godfrey Tsenangamu argued that Goche displayed disrespect of the highest order by plotting to kill the President and that he was a saboteur unfit to occupy such a senior post in the party. It had to take Politburo member Saviour Kasukuwere to calm the youths who had blocked the main gate, preventing Goche from leaving in his posh Toyota Land Cruiser SUV.

This was after he hurriedly withdrew his CV, saying he wanted to leave the venue. Apart from VP Mujuru, the other CVs that were rejected by the Mashonaland Central Provincial Election Directorate were for Primary and Secondary Education Minister Dr Lazarus Dokora, Tourism and Hospitality Industry Deputy Minister Epmarcus Kanhanga, Hon Edgar Chidavaenzi, MP and Hon Criswell Mutematsaka.

Goche attempted to use the main gate while leaving the venue, but was blocked by the youths who had been addressed by provincial acting chairperson CWonder Mashange, Politburo member George Rutanhire and Zanu-PF youth national secretary for legal affairs Tongai Kasukuwere. Saviour Kasukuwere later intervened and calmed the youths to let Goche leave the venue using the main gate.

The youths jeered and mobbed his vehicle as he sped off.They later submitted a petition to the provincial executive detailing why they did not want those on the petition to be considered for Central Committee posts. “On this 23rd day of November 2014, we the undersigned being bona fide members of the revolutionary party Zanu-PF, do hereby re-affirm our 100 percent support for President Robert Gabriel Mugabe, the First Lady Dr Grace Mugabe and the First Family,” said the youths.

“We are grateful to President Mugabe for his support to us in agriculture, mining and our small to medium enterprise ventures, among other sectors. “We are, however, disturbed to note that there are some senior members in the party who are deciding to rise against our President whom we elected overwhelmingly on 31 July 2013. Such individuals have taken it upon themselves to join hands with western countries and opposition parties in Zimbabwe to effect illegal regime change.

“We are shocked that these same people who have benefitted immensely from President Mugabe’s goodwill are even plotting to kill him.” The youths said in the petition that such high ranking people had no places in the leadership structures of the party as some of them were exchanging valuable party information for “dirty” money through the American Embassy and its official Mr Eric Little.

“Our immediate demand, therefore, is that the Provincial Elections Directorate (PED) must not accept the curriculum vitae (CVs) as they have no place in our central committee. Having stated this, we the undersigned, want to inform you that the following are some of the people involved,” said the youths before listing 10 of the party officials. The petition was handed over to Mashange who later gave it to Saviour Kasukuwere who promised to hand it over to senior party officials at the Zanu-PF headquarters.

In the meeting before the demonstrating youths arrived at the venue, some party officials and war veterans had said some of the officials who were being implicated in plotting to assassinate the President should not submit their CVs. But Goche had said party members should not make such decisions. “We should not take decisions here,” he said. “My own advice is that take the CVs and make some remarks and state reasons why you don’t want these people.”

Speaking after the meeting, Mashange said the PED meeting went on well and that they conducted a vetting process while they were receiving the CVs. “In the process, there was a demonstration by the youths against some of the leadership, especially Goche whom they said we should not accept his CV and those other people who are plotting to kill President Mugabe,” he said. “Goche decided not to submit his CV and he withdraw. I think he did an honourable thing by withdrawing.”

Mashange said as a province they wanted people who defended the President and the party and were against sellouts. Midlands provincial secretary for Information and Publicity Cornelius Mpeperi said Buka and Nhema were rejected for fanning factionalism. “The executive council has withdrawn the candidature of aspiring Central Committee members, Floda Buka, Francis Nhema and Mutingwende,” he said.

“The meeting felt strongly that Flora Buka is linked to the disciplinary issues in Gokwe North where some members are charged for promoting factionalism and the meeting held has unearthed a lot of things which are related to factionalism. “The executive passed the other resolution which was the first, a vote of no confidence in four members, Edmund Mukaratigwa, Fred Moyo, Renius Madende and Manongo for fanning factionalism in the province.” Mpereri said the provincial executive had also suspended about 73 members from Mberengwa, Shurugwi and Gokwe North districts for periods ranging from one to three years.

“In Mberengwa, 10 chairpersons who were charged with inciting violence, disrupting constitutionally constituted meeting and fanning factionalism have been slept with sentences varying from one year to three years. “Five provincial members and 47 district chairpersonsc in Shurugwi who were charged with issues ranging from holding unconstitutionally authorised meetings outside the province and allegedly bribed to influence the outcome of the central committee elections were found guilty and suspended for a period ranging from one year to three years,” Mpeperi said.

“In Gokwe north, three provincial members and eight district chairpersons with allegations of running parallel structures and funning factionalism have been given sentence ranging from reprimand and three years suspension.” Mpeperi said the sentences passed on the members were to be submitted to the Provincial Disciplinary Committee which will pass it to the National Disciplinary Committee.

He said Chiratidzo Mabuwa and afanana Zhou’s cases who were also linked to fueling factionalism in the province were differed to a later date. Herald

Robert Mugabe has one more day to live

Mujuru and allies booted out of ZANU Central Committee

HARARE - THE Mashonaland Central Provincial Election Directorate yesterday rejected Vice President Joice Mujuru’s CV for nomination into the Central Committee saying they did not want to associate with anyone implicated in the plot to assassinate Preside...
Share via
x
More Information
x