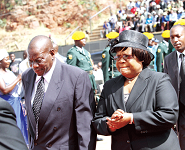 3.4kViews
0 Shares Share on Facebook Share on Twitter
ZIMBABWE – The bravery shown by former Vice-President Joice Mujuru in re-entering politics on the opposition side should not be questioned at all.
As Zimbabweans, rallying behind her could be the best thing to do because she and her husband, the late Retired General Solomon Mujuru opened the way for President Robert Mugabe to take the office he holds to date.

Voting for Mujuru is the way forward because she has the keys to unlock the doors held by the monster they created. Very few people will have the courage to challenge Mugabe as he is known for his ruthless reaction towards anyone who want to remove him from power even through voting.

Shingisai breaks down in admiration of Mugabe

Women claiming US$250 maintainance for her child from husband