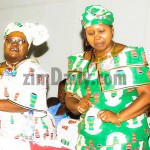 ZIMBABWE – Former Presidential Affairs minister Didymus Mutasa in an interview last week said that contrary to reports that the leader of the People First (PF) project and former Vice-President Joice Mujuru had left her lieutenants to do the “dirty work” in the formation of the project, she had been involved in the-PF project since her unceremonious expulsion from Zanu-PF.

According to Mutasa, Mujuru is “now waiting for the right time” to go public as leader of-PF.

Mujuru was kicked out of Zanu-PF together with Mutasa (then secretary for administration) and Rugare Gumbo (the spokesperson). Nine provincial chairpersons perceived to be her allies, and scores of other leaders, including over 10 Cabinet ministers were suspended from Zanu-PF.

“The people of Zimbabwe must know that Mujuru has been leader of People First since she was ousted from Zanu-PF. The way she was removed showed the true undemocratic nature of that party. She has been involved from day one and she will not abdicate her responsibility because she is acutely aware of the goodwill that Zimbabweans have for her,” Mutasa said.

Mutasa said Mujuru showed she is serious about her role in the political project by rejecting a life pension offer from Mugabe’s government.

Sibanda said: “She has a responsibility to defend our struggle and is aware of that. Mujuru spends most times in our meetings listening. She has this ability that you do not find in many politicians – that of talking less and listening more.

“Mujuru was a victim of circumstances. She was targeted by counter-revolutionaries, and some of us put our lives on the line because we could not let someone who fought for the liberation of this country be humiliated like that,” Sibanda said.

ZIMBABWE - Former Presidential Affairs minister Didymus Mutasa in an interview last week said that contrary to reports that the leader of the People First (PF) project and former Vice-President Joice Mujuru had left her lieutenants to do the 'dirty work'...
Share via
x
More Information