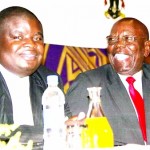 ZIMBABWE – As Zanu PF continues to be ravaged by its seemingly unstoppable factional and succession wars — amidst Zimbabwe’s economic meltdown which is blamed on the ruling party’s misrule — a former close confidante to President Robert Mugabe, Didymus Mutasa, says the party will implode completely when the nonagenarian leaves office or dies.

He said as the country’s decades-long political and economic crises escalate, the former Presidential Affairs minister also said the only thing that could save the country from dying with Mugabe and Zanu PF was if the embattled nonagenarian passed on the leadership baton now.

“The situation in the country is dire, and the economy is in the intensive care. You can hardly find a bank that will lend you money
these days. I know this as a new farmer myself. How then are people supposed to prepare for the new farming season, for example?

“In the meantime, we hear all the time that the VPs are fighting among themselves, and we hear that this one and that one are also fighting. They (post-congress Zanu PF leaders) accused us of plotting to destroy the party. Now, who is destroying the party?

“Of course, they were lying when they expelled us from the party and they know that. We were expelled from our party by  mafikizolos. The President was misled and now we all fear that the party will not last long,” Mutasa said.

The softly-outspoken politician added that since he had committed his life to politics and fighting for democracy, he — along with former Vice President Joice Mujuru and “other like-minded people” — were dedicating their time to building the rival “original Zanu PF to fast-track theend of the  post-congress Zanu PF”.

Asked why it was taking so long to get the “original” Zanu PF that usesthe slogan People First going, Mutasa said “even a baby takes nine  months, after being conceived, to be born”.

“Because they destroyed our party, we are now starting something new. As people who have politics in their blood, hamumire muchitarisa mahumbwe atiri kuona aya (we won’t entertain the nonsensical shenanigans taking place in the post-congress Zanu PF). A child takes nine months and we are going to make the announcement (about the People First movement) soon.

“Zanu PF is going to go. Musangano unosimbiswa nemukuru wawo. Panoenda mukuru ndipo panoenda musangano wacho. VaMugabe vachaenda neZanu PF (A party is made strong by its leader. When the leader goes the party also goes. Mugabe will go with Zanu PF). This is because he is refusing to pass on the baton,” Mutasa said.

Asked further if his expulsion from the ruling party together with other party stalwarts, on untested allegations of plotting to oust and kill Mugabe, as well as fanning factionalism had healed the post-congress Zanu PF, Mutasa said things had, to the contrary,
worsened.

Mutasa spoke as a new war has broken out in the strife-torn ruling Zanu PF over the frail nonagenarian’s state of health and his capacity toremain at the helm of the party and the country. This follows typically off-colour utterances by Mugabe’s controversial
wife, Grace, at a recent rally in Mashonaland West, as well as ill-judged comments by the embattled Vice President Emmerson Mnangagwa that he made to a London-based magazine and over which he is receiving factional stick.

Speaking at Murombedzi Growth Point, the gaffe-prone Grace said, “Don’t criticise me because you hate my husband. Time will come when president Mugabe is gone, (and at that point) you will regret and wish that the president was around” — in remarks that some in Zanu PF interpreted as meaning that all was not well with Mugabe.

On his part, Mnangagwa — answering a seemingly innocuous New African magazine question on the post-Mugabe scenario — said, “We shall miss him (Mugabe) dearly (when he leaves). He is an outstanding leader and human being” — in comments that have placed him in the eye of a humongous storm in the ruling party which is wracked by deadly factional and succession wars.

Zanu PF insiders who spoke to the Daily News yesterday said the hullabaloo about the well-being of Mugabe reflected the ugly divisions that continue to devour the ruling party, and how many ambitious bigwigs were already thinking about life after the nonagenarian who is increasingly showing his advanced age and declining health.

During the recent burial of High Court judge Andrew Mutema at the Heroes Acre, Mugabe moved around with the assistance of Grace, taking brief rests as he followed the undertakers.

And during official opening of the Harare Agricultural Show, Mugabe moved around with the assistance of Mozambique president Filipe Nyasu, and the nonagenarian has also lately cut down on the length of his speeches as calls for his retirement or resignation grow.

Mnangagwa’s remarks on the post-Mugabe future were publicly criticised by the minister of Higher Education, Jonathan Moyo, on Twitter — whowent on to say the senti ments were “premature”.

“This (latest Zanu PF) war is about the health of the president and how this impacts on the multi-layered quests by various  interested parties to succeed him, even as they all pretend that they are engaging in this fight for him and that they don’t want him to pass on,” a central committee member said bluntly.

In addition to his advanced age and increasingly poor health, which is commensurate with people of his age, and which often sees the nonagenarian making frequent and costly State-funded visits to the Far East for medical attention, Mugabe is also having to contend with arguably his biggest political challenge since Zimbabwe’s independence from Britain in April 1980 — an open rebellion by many senior members of his ruling Zanu PF party who are impatient to see him leave office.

Analysts and spokespersons for opposition political parties who have previously said that it is time the nonagenarian stepped down as he had also allegedly now become a “lame duck” and “absentee” president who was often travelling outside the country on “frivolous” missions or for medical attention than actually governing the country.

The crisis in Zimbabwe deepens

ZIMBABWE - As Zanu PF continues to be ravaged by its seemingly unstoppable factional and succession wars — amidst Zimbabwe’s economic meltdown which is blamed on the ruling party’s misrule — a former close confidante to President Robert Mugabe, Did...
Share via
x
More Information
x