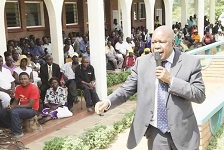 ZIMBABWE – In a dramatic twist to Zanu PF infighting; War veterans minister, Christopher Mutsvangwa on Friday evening had a faction of the War Vets Association pass “a vote of no confidence” on him.

Mutsvangwa in response told said the move is an attempt to overthrow the entire government of Zimbabwe.

The controversial Manicaland war veteran, Mandiitawepi Chimene, announced during a press conference Friday evening during which she said Mutsvangwa is on his way out.

Chimene who read out a 16 point charge sheet for Mutsvangwa which includes disrespecting the President, indicated that the war veterans association was going to get President Mugabe to remove him.

“Mutsvangwa is selective with people that he works and he discriminates some members including myself,” Chimene said. She said their minister thinks he is powerful and spends his time fighting in newspapers. The man’s wife, Monica is also in the firing line.