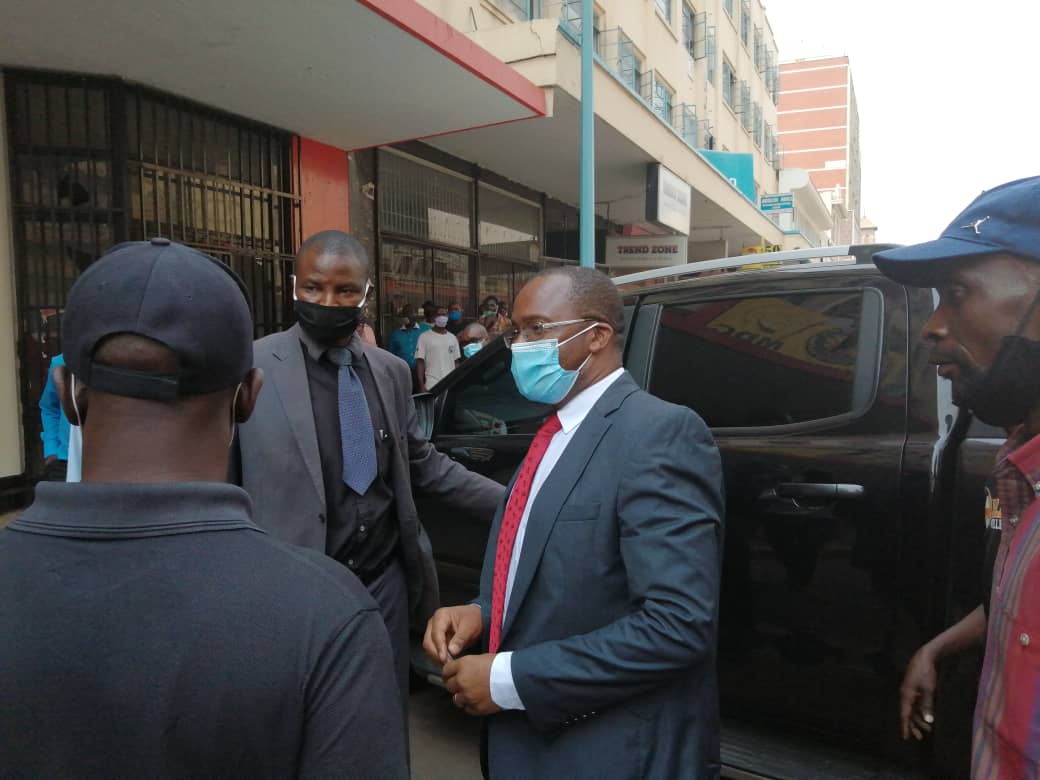 MDC-T Secretary General, Douglas Mwonzora outside Harvest House today after the building was taken over by some party youths last night

Vowing that they were going to regain control of the building, Senator Mwonzora said it was only a matter of time before they do so.

He was speaking to the media outside the MRT House which is under the control of youths who are claiming to be Harare Province Youths for the 2014 MDC-T structures.

“They are Mr Chamisa’s people, he sent them we know that. He arranged that. We just want to say that it’s a question of time. We will take our property back,” said Mwonzora when quizzed about why he is claiming the people inside were Chamisa’s people.

He also said these youths were organised and funded by G40 to take over the building.

“These people were organised and funded by G40 to take our building. They have taken it unlawfully and using violence.”

Mwonzora also said the people had held some twelve people hostage inside the building.

Led by Paul Gorekore, the youths seized the offices yesterday at night and locked up all entrances demanding that the party goes back to the 2014 structures and resolve the current internal fights in the party.

In a statement, Gorekore said they were taking over the building to protect the democratic movement which was under threat due to infiltration by Zanu-Pf elements.

“We have been concerned by the recent developments where the party had been infiltrated by some ZANUPF elements battling to destroy the People’s movement thereby aiding the suffering of the masses.”

Harvest House was occupied by the Khuphe led MDC-T in June with the help of security forces following a controversial Supreme Court ruling that gave her interim leadership of the party.

Since then Khuphe and her allies who include Mwonzora have embarked on a massive recall exercise of Members of Parliament who won their seats on an MDC-Alliance ticket.

Many local councils have also been left almost dysfunctional after the recalls with many ward seats declared vacant for the upcoming by-elections to be held in December.

HARARE - MDC-T Secretary General, Douglas Mwonzora has claimed Nelson Chamisa sent the youths who on Sunday night took over the party's headquarters. Vowing that they were going to regain control of the building, Senator Mwonzora said it was only a matter...
Share via
x
More Information
x