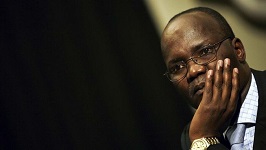 ZIMBABWE – A few weeks ago Higher and Tertiary Education minister Jonathan Moyo’s family was thrown into deep mourning when news broke out that their 20-year-old daughter, Zanele Naledi Ntombizodwa — who was studying in South Africa — had been found dead in her room at a flat on a Saturday morning.

The promising life of the young woman studying for a degree in Political Science, International Relations and Gender Studies was brutally cut off, leaving many unanswered questions.

She became the latest casualty of Zimbabwean students dying in strange circumstances in foreign land particularly in South Africa.

Last year President Robert Mugabe’s nephew, Takudzwa Wesley Goronga, was found dead in a wardrobe at Monash University in Johannesburg after having gone missing for 10 days.

Earlier in the same year, a female Zimbabwean student had also been found dead in her room in a hall of residence at a local university. Nozipho Tshuma’s body was discovered in her locked room at the Vaal University of Technology in Vanderbijlpark.

Police spokesperson Colonel Lungelo Dlamini would not confirm allegations that Tshuma had been raped and strangled, but indicated that investigations were underway.

Another final year student at Rhodes University was burnt to death in his apartment a day before he was scheduled to leave campus.

“He was supposed to be picked up the day after because he had finished his examinations,” said a relative who is still grasping to understand the tragedy.

The young man was found badly burnt and barely alive. He fought bravely for his life, but sadly passed away a few days later.
In 2003, a son of former Zimbabwean Finance minister Simba Makoni committed suicide in Cape Town. Tonderai Makoni (then 23) was in his third year of a cultural studies course at the University of Cape Town. It was reported that he had been apparently suffering from depression.

Following the latest death of Moyo’s daughter, the media has been awash with all sorts of conspiracy theories as regards the cause of her death, with some sympathising with the family, while others chose to hit back at the minister who has ruffled a few feathers.

And since the discovery of the piece of information that was “deliberately” left out in the initial reports, that she was buried without her heart, the speculation has reached an all-time high.

However, when the frenzy slowly dies down, the question that will remain is: Why are so many students are dying in often unexplained circumstances, suicides or such?

Addressing mourners during the burial of his 20-year-old nephew, who was an Information Technology student at the time of his death, Mugabe hinted at a possible cause of death.

While acknowledging that the death was mysterious, he, however, stunned mourners when he said that some children sent to study outside the country returned home with some negative habits such as doing drugs.

The issue of abuse of substances has been mentioned in some of the deaths and in Zanele’s case the South African media reported that an autopsy had ruled out foul play, saying she probably died of alcohol poisoning from excessive drinking.

A source that was quoted by The New Age newspaper said: “We’re also looking into reports that she tried to commit suicide twice and ended up in rehab last year as a result of alcohol abuse.”

“We are just waiting on the toxicology report.”

A second source confirmed to same publication: “It remains unofficial that some internal organs burst as a result of excessive drinking.”

Readers who have been following the stories on various websites have proffered different perspectives on the deaths with some linking them to xenophobia attacks.

“Black South Africans’ hatred towards Zimbabweans is very disturbing. Every Zimbo domiciled in Joza can attest.This is not an isolated incident — there are many cases, some will never hear and read about,” said one reader.

Other readers said the attacks on foreigners in South Africa were merely a manifestation of a culture of crime and the
social problems afflicting that country.

“What have you got to say about the alarming numbers of black and white South African men and women who are carjacked at gunpoint and needlessly murdered every hour for mobile phones, jewellery and credit cards?” quipped another observer.

Many others said politicising the murders of the students and branding them xenophobic was a misguided analysis.

According to the World Health Organisation, 15% of South Africa’s population has a drug problem. This high level of drug abuse costs South Africa over R20 billion a year.

These statistics have earned the country the dubious reputation of being one of the drug capitals of the world.

Statistics released by the Hospital Association of South Africa showed that there were growing numbers of patients younger than 20 being admitted to treatment centres.

The steady increase in the incidence of drug abuse and addiction in South Africa has been due to easy access to high quality and relatively cheap drugs, coupled with high levels of unemployment, trauma, violence and the deterioration of social support by family members, friends and the community.

ZIMBABWE - A few weeks ago Higher and Tertiary Education minister Jonathan Moyo’s family was thrown into deep mourning when news broke out that their 20-year-old daughter, Zanele Naledi Ntombizodwa — who was studying in South Africa — had been found ...
Share via
x
More Information
x