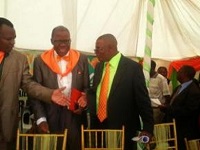 ZIMBABWE – Leaders of the Movement for Democratic Change (MDC) and the People’s Democratic Party (PDP) met in Harare last week for consultations aimed at reviving efforts to merge the two parties.

The MDC is led by Welshman Ncube while the PDP is led by Tendai Biti.

The two parties are hopeful that a position would be reached by January 2016, to pave way for the unification of the two parties in a bid to form a formidable challenge to the ruling ZANU-PF in 2018 polls.

The merger of the two parties, both offshoots of the MDC-T led by Morgan Tsvangirai, has encountered hurdles since a memorandum of understanding (MOU) was signed last year.

Both parties have been pre-occupied with internal challenges that had forced them to abandon talks.

Ncube’s MDC has been hard-hit by internal ructions whereby a significant number of its top leadership resigned from their posts, while others have left the party altogether.

These include senior party officials such as Nhlanhla Dube, Frank Chamunorwa and Goodrich Chimbaira, among others.

Priscilla Misihairabwi-Mushonga, the party’s former secretary-general, resigned from her post this year.

PDP, formerly the MDC Renewal Team, had its own share of internal turmoil that made it near impossible for talks on unity with peers.

Elton Mangoma, an instrumental figure in the formation of the then MDC Renewal Team, fell out with Biti over leadership of the new party.

A disgruntled Mangoma then went on to found the Renewal Democrats of Zimbabwe in June this year, a move heavily criticised by political analysts as fragmenting the country’s opposition political parties.

Samuel Sipepa-Nkomo, then the caretaker president of the MDC Renewal Team, had told this publication that his party had decided to halt coalition talks as its members wanted to first go to an elective congress and elect a substantive leadership before joining hands with other opposition political forces.

Sipepa-Nkomo told the Financial Gazette in an interview this week that the dust which had gathered around the unification talks had settled.“As late as last week, the top leadership of both parties met and we are pursuing these discussions. We are investigating on the finer details of whether its re-unification or unification, seeing that now we have a new party (PDP),” he said.

Sipepa-Nkomo said the coalition talks would proceed smoothly despite the absence of Mangoma, who was once a part of the talks.

“There is zero impact caused by his (Mangoma) absence. Of those in leadership, those that were there and have since left, it was only Mangoma. The rest of the leadership remains in place,” said Sipepa-Nkomo.

“The re-unification or unity talks have not collapsed and we are all aware that we have unfinished business on the shelf. The MDC is currently oiling its machinery ahead of the 2018 elections. The morale is at roof level in the MDC camp and exciting moments for the MDC family are lying ahead,” a jovial Sipepa-Nkomo said.

Political observers opined that a united opposition political force was the best chance possible of dislodging ZANU-PF from power.

ZIMBABWE - Leaders of the Movement for Democratic Change (MDC) and the People’s Democratic Party (PDP) met in Harare last week for consultations aimed at reviving efforts to merge the two parties. The MDC is led by Welshman Ncube while the PDP is led by ...
Share via
x
More Information
x