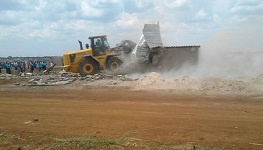 ZIMBABWE – The Welshman Ncube led MDC has accused their former allies the Morgan Tsvangirai MDC of working “in cahoots” with Zanu PF to demolish people’s homes in Harare.

The whole of last week, the MDC-T led Harare City Council destroyed the remaining houses at two settlements Allington and Dunstan Estate along Airport Road. The municipality started the demolitions late last year but stopped in December only to resume last week.

MDC-T has over 40 out of the 46 councillors in Harare.

The demolitions by the Harare city council came after President Robert Mugabe in November ordered government to destroy the settlements, saying they were tarnishing the image of the country.

In a statement Monday, MDC spokesperson Kurauone Chihwayi said Tsvangirai, by virtue of him controlling the Harare city council, was equally to blame for the demolitions.

“It is clear to us that Zanu PF and the MDC-T are engaged in an unholy alliance to escalate the suffering of the people while they loot and apportion themselves land and stands desperately needed by the masses,” said Chihwayi.

“In our view both these parties are culpable for these demolitions and by not lifting a finger in defence or in the fight for justice for the affected families, the MDC-T led council is aiding and abetting Zanu PF’s treachery”.

MDC-T spokesperson Obert Gutu said council officials were only ceremonial officers and blamed the Zanu PF government for their reluctance in the implementation of the new constitution which gives power to local authorities.

“We still do not have formally legislated metropolitan councils in Harare and Bulawayo and, as a result, these two big cities still have ceremonial mayors whose day to day functions and activities are essentially directed by the central government through the Minister of Local Government,” said Gutu.

“The Zanu PF government must be compelled to respect the provisions of the country’s Constitution,” he added.