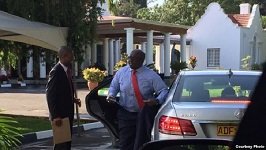 ZMBABWE – New United States Ambassador to Zimbabwe, Harry K Thomas Jr., officially started duties in Zimbabwe after presenting credentials to President Robert Mugabe to whom he pledged to continue the important work of building strong and respectful relations between the two countries.

In a statement after meeting Mr. Mugabe, Ambassador Harry Thomas Jr. said America is keen to find common ground that would enhance bilateral relations between the two nations.

He said the USA would continue to promote democratic institutions, equitable economic growth, public health and food security in Zimbabwe.

The United States, he said, shared the desires of the Zimbabwean people who want to see a peaceful, democratic and prosperous Zimbabwe that provides for its people and contributes to regional stability.

Ambassador Harry Thomas Jr. said, “We strongly believe that is important to engage with government and non-governmental entities alike to promote our shared values and work together in areas of common concern.”

He added that the U.S Embassy in Zimbabwe would continue to promote business linkages and encourage American investors to look closely at Zimbabwe’s educated labour force and long-term growth potential.

Reacting to some of these remarks, Harare resident, Dziya Mlambo, said he expects the American ambassador to mend relations between the two countries.

“There have been broken relations between us and America so we think that he will work hard to ensure that we relate well and benefit from relations with America.”

Political activist, Malvern Mukundu, added that it was pleasing that the American envoy was keen to normalize relations between the two nations.

“I hope that the new ambassador will be able to thaw the relations and be able to chart a new  economic trajectory for the country.”

He said support was also needed to mitigate the effects of the Elnino-induced drought.

“There is the issue of drought. I hope and trust that the Americans through the ambassador will help us on this hour of need. We don’t have adequate food and we definitely need help.”

Zanu PF legislator and chairman of parliament’s Foreign Affairs Committee, Kindness Paradza said the new ambassador must prioritise the removal of targeted sanctions on the Zimbabwe.

On Monday this week, Foreign Affairs Minister, Simbarashe Mumbengegwi, slammed the U.S and other Western countries saying maintaining sanctions on Zimbabwe was derailing’s the country’s re-engagement efforts with developed nations.

Mumbengegwi said, “When it comes to re-engagement, we are always ready but sometimes you think as you talk and discuss, they are not really listening or taking anything seriously as illustrated by the recent renewal of sanctions on our first family.

The US is building a new embassy campus that would cost $30 million and create 850 jobs. Ambassador Thomas junior takes over from Ambassador Bruce Wharton who has been promoted.

The United States and the European Union imposed targeted sanctions on President Mugabe and his inner circle following claims of human rights violations and election rigging.