News, 57 mins ago ​Zimbabwe has everything to play for as Afghanistan eyes … 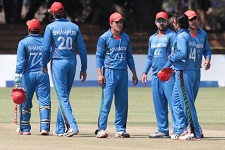 Visitor, up 1-0 in T20Is after win in ODI series, has a shot at making the tour even more memorable

It has been a difficult past 24 hours for the people of Afghanistan, with a severe earthquake rocking a large section of the country’s northern provinces on Monday afternoon. It can’t be easy for anyone from the country to get on with life, especially if they are far away on work, but that’s what the national team cricketers must do when they walk out to take on Zimbabwe in the second and final Twenty20 International in Bulawayo on Wednesday (October 28).

It’s an opportunity for Afghanistan to finish off a hugely successful tour on a high and that should help it stay focused for one last three-hour stretch.

After registering a historic 3-2 win – its first against a full-member nation – in the five-match One-Day International series, Afghanistan, powered by Dawlat Zadran, earned a six-wicket win in the first game of the two-match T20I series.

Dawlat’s three-wicket burst and an unbeaten half-century stand between Mohammad Nabi and Najibullah Zadran gave Afghanistan victory, and it is now on the verge of registering yet another famous series win to further underscore its credentials of being one of the most exciting Associate teams in the world.

Nabi, who has given up the captaincy of the team, has led the way with the bat right through the series, first scoring 223 runs in the five ODIs at an average of 44.60, and then striking a crucial 33 not out in the first T20I.

Nabi, fortunately for Afghanistan, has found able allies in Najibullah, Mohammad Shahzad and Asghar Stanikzai, the new captain, to give his side’s batting a formidable look. And, along with Dawlat, Amir Hamza has been a thorn in Zimbabwe’s flesh right through the series with the ball.

Zimbabwe, meanwhile, will be desperate to turn things around after having suffered a series of close losses. Sean Williams, who scored a century in a losing cause in the last ODI, Sikander Raza, Richmond Mutumbami, Chamu Chibhabha and Elton Chigumbura have all been in decent touch with the bat, but Zimbabwe has failed to pack a finishing punch in the matches so far.

As far as the bowling is concerned, Wellington Masakadza, with ten wickets at 18.80 was the leading wicket-taker in the ODI series, but returned 1 for 39 in Afghanistan’s 159 for 4 in the T20I. Tendai Chisoro, Christopher Mpofu and the other bowlers must also lift their games, but if Zimbabwe wants to prevent what could be an embarrassing loss, the entire team will have to lift its game, especially the batting unit.

News, 57 mins ago ​Zimbabwe has everything to play for as Afghanistan eyes …

ZIMBABWE - ​Zimbabwe has everything to play for as Afghanistan eyes more glory Visitor, up 1-0 in T20Is after win in ODI series, has a shot at making the tour even more memorable It has been a difficult past 24 hours for the people of Afghanistan, with a...
Share via
x
More Information