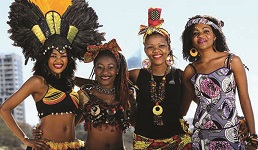 ZIMBABWE – One of Zimbabwe’s most successful musical exports Nomathamsanqa Mkwananzi, better known by her stage name Nkwali, is on a successful whirlwind tour with Mother Africa, a musical ensemble made up of artistes from nine African countries.

Nkwali, who is a co-pioneer of the all-conquering Inkululekho Yabatsha School of Arts (Iyasa), is one of the lead vocalists for Mother Africa which she joined in 2006.

The versatile singer, choreographer and composer, who recently launched her debut solo album, Sithokozile, said she is happy to be raising the Zimbabwean flag high.

“Mother Africa has been a revelation and I have learnt a lot from working with them. I believe the experience gained will certainly spur me to great heights in my solo career. On another note, it also feels good to be representing Zimbabwe in this all-Africa ensemble”.

Nkwali, who is a Zimbabwe Music Awards (Zima) 2015 double nominee under the best newcomer and best a capella album categories, described the current tour which is taking her to Finland, Germany, Austria, Switzerland, Netherlands, Estonia and Lithunia as a big success.

“The tour is quite a success and the response overwhelming. We are having an audience of 1 500 per show and in Germany we even had 2 500 coming. Most of the shows are in Germany, but we are also moving on to the other mentioned countries and Italy”.

“It’s a circus show involving acrobatics fused with African traditional dances. We do gumboot Ivory Coast dances, Zimbabwean Shona and Ndebele dances, and South African Zulu dances, among others. There is also the live band where I am the lead female vocalist. It’s a mix of all those things put together on one stage, different nationalities and languages and the experience is mind-blowing. People here love our performances,” she said.

Nkwali revealed that in her act she performs songs from artistes like Mahotela Queens, Angelique Kidjo as well as other Ethiopian songs.

“It is all about Africa and it’s more of showcasing the different cultures we have through acrobatics, dance, song and acting as well. The show is rich in content and it feels good being here and helping to tell the Zimbabwean story through music and art”, she said.

The sultry singer revealed that she could not wait to be back home and perform for her own people.

“I have gained a lot of with Mother Africa, I have made friends and important contacts, picked a few languages like Amarik, Swahili, a bit of French and I am looking forward to come back and perform as Nkwali now that I have gained this experience,” she said.

She said she launched her solo album last November in Bulawayo and the response was great. “I was really shocked to say the least,” Nkwali said. After the launch she staged two shows in Bulawayo although she had not been able to perform in Harare and other parts of the country.

“I am putting together a show in Harare where I am looking forward to perform and launch my album. What I have seen from my experience is that we do have the talent in Zimbabwe and with support we can go far,” she said.

Nkwali has used her voice and performances to defy both physical and cultural boundaries.

Music has always flowed in her blood from the tender age of seven when she landed a role as an extra in the movie The Power of One acting alongside international stars that include Morgan Freeman and Alois Moyo.

That marked the beginning of a fruitful career in the arts which has taken her around the globe, performing in countries such as Austria, Zambia, the US, Singapore, Germany and New Zealand.

Her stint with theatre, music and dance exploits with Iyasa also sharpened her creative skills and instincts.

She was one of the star singers of Cirque Mother Africa, a sell-out Broadway performance that toured Australia in 2014.

The UK needs to stay out of Zimbabwe’s succession politics

ZIMBABWE - One of Zimbabwe’s most successful musical exports Nomathamsanqa Mkwananzi, better known by her stage name Nkwali, is on a successful whirlwind tour with Mother Africa, a musical ensemble made up of artistes from nine African countries. The per...
Share via
x
More Information
x