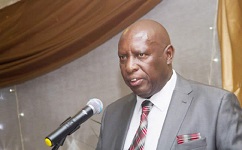 ZIMBABWE – The Zimbabwe Energy Regulatory Authority yesterday began stakeholder consultations on a proposed electricity tariff hike with Energy and Power Development Minister Dr Samuel Undenge indicating there was no going back on the increase as Zesa had to finance urgently required power generating projects.

Among the immediate projects to ease the power crisis in the country is the 200 megawatts emergency power plant to be installed at the Dema Substation in the next eight weeks.

Dr Undenge said a tariff increase was justified as Zesa had to pay for the power imports from countries like South Africa, which is supplying the country with 300 MW.

The power crisis has been worsened by falling water levels at Kariba Dam which has seen power generation going down from 700 MW to 285 MW.

“The cheapest source of power has been the Kariba hydro,” said Dr Undenge.

“Now that Kariba, the cheapest source, is no longer there and we are now importing power, the economy dictates that the tariff has to increase. That gap has to be fulfilled. An increase in price is necessary to compensate for the loss of generation at Kariba and the imports. The cost of not having power is more than having that power as generators in homes are expensive to run. The emergency diesel generators coming in the next eight to 12 weeks are expensive to run and it means we have to be prepared for that.”

Dr Undenge declined to disclose the extent of the tariff increases proposed by the Zimbabwe Electricity Transmission and Distribution Company (ZETDC) and Zimbabwe Power Company from the current 9,86c per kilowatt per hour but sources said the power utility wanted the cost to rise to pegged at 14c/kWh.

The average electricity cost in the Southern African region is 14c/kWh.

Dr Undenge said stakeholder consultations began in Harare, and that Bulawayo was the next port of call.

“The Electricity Act requires Zera to conduct consultations with stakeholders over the price issue and those are starting today (yesterday),” he said.

“Zera will also consult other stakeholders like the Confederation of Zimbabwe Industries, farmers unions and the Zimbabwe Chamber of Mines, among others. After the consultations, they are going to come up with recommendations, which I will look at and take to Cabinet.”

Dr Undenge said while current electricity charges had not been cost-reflective, the proposed increase should provide a “win-win” situation between Zesa and its consumers.

“The tariff has not been cost-reflective as there has been no increase in the past four years,” he said.

“I envisage an increase which enables Zesa to remain afloat and at the same time not negatively affect farmers, industry and other consumers. Energy is vital for production to take place and I will ensure we achieve the possible lowest tariff increase.”

He said construction of the Mutare Peaking Plant, which is set to add 120 MW, would also alleviate power challenges.

“The tender was awarded to Helcraw Electrical (Pvt) Limited and they are now finalising the financial proposal and feasibility studies so that work can start as soon as possible. We are almost there.”

Government is also working on a number of long-term projects, chief among them expansion of Kariba South Power Station and Hwange Units 7 and 8.

The two projects are expected to add a combined 900 MW to the national grid.

The projects are being financed by the Chinese under mega deals agreed between President Mugabe and his Chinese counterpart Xi Jinping last year.

No going back on power tariff hike: Minister

ZIMBABWE - The Zimbabwe Energy Regulatory Authority yesterday began stakeholder consultations on a proposed electricity tariff hike with Energy and Power Development Minister Dr Samuel Undenge indicating there was no going back on the increase as Zesa had ...
Share via
x
More Information
x