No one is safe in Zimbabwe: Bishop 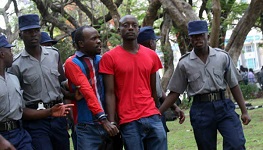 ZIMBABWE – Outspoken preacher bishop Ancelimo Magaya, said Zimbabwe’s political situation has now reached a stage where no one including those in Zanu PF are safe from abductions.

Reflecting on the deadly factional fights within political parties and the disappearance of human right activist, Itai Dzamara, who was forcibly taken from his home area after standing up against the government, Magaya said Zimbabwe is now a dangerous country.

And the outspoken preacher said it is now time for the Church to rise up and openly denounce injustices and irregularities taking place in the country.

Speaking at a Youth Advocacy for Reform and Democracy (Yard) meeting in Harare yesterday, Magaya who is the new chairman of the trust, said Zimbabwe needed to speak with one voice.

“Yard will make it when you can distinguish that evil is evil no matter who is the victim. Empathic solidarity simply means when Itai, a fellow youth has been abducted and you keep quiet, what does that mean. The clearest indications in Zimbabwe at the moment is that there is nobody who is secure, nobody is safe.

“Today, you will think it’s Mai Mujuru (former Vice President Joice Mujuru), and 12 months close to the anniversary of her ouster, there is your (Chris) Mutsvangwa, nobody is safe, so empathic solidarity simply means that when somebody experiences bad things, we stand in solidarity with that person,” said Magaya.

The preacher said while civic society had become weak and is torn in internal wars, the Church should provide an alternative.

“I am talking about advocacy, the advocative lifestyle that we see in the life of our Lord Jesus Christ, where He was always at loggerheads with Pharisees and Sadducees for selectively applying the law

“The Church should make an open declaration in condemning what has happened, so clearly the way we find it written in the word of God.

“Zimbabwe cannot be transformed by one entity, or one organisation or one political party. I believe very strongly that we need to have mutual deference for one another. You should find opportunities for synergies,”

Yard founder and politician Temba Mliswa, said the youths should be at the forefront of developing Zimbabwe, not be a wing in political parties.

‘The reason why the convergence that is being talked about is not happening is because the youth are not involved. There is no political party right now which the youth believe will address their interests,” said Mliswa.

“Let it (Yard) not be mistaken for a political party, it came in to conscientise the youth to become part of the voters’ roll.”

Motivating the organisation’s national executive, Mliswa said most of the successful movements were started by the youths.

“When we say we are going to protest and wear black, they can’t stop that. They have no resources to stop a peaceful protest which is happening in all the wards in the country, and all the constituencies and all the provinces in the country. You need to be where the community are, where the people are.

“If Thabo Mbeki was recalled by the youth in ANC when Julius Malema was the leader, there is no organisation that can survive without the youths,” said Mliswa.

No one is safe in Zimbabwe: Bishop

ZIMBABWE - Outspoken preacher bishop Ancelimo Magaya, said Zimbabwe’s political situation has now reached a stage where no one including those in Zanu PF are safe from abductions. Reflecting on the deadly factional fights within political parties and the...
Share via
x
More Information