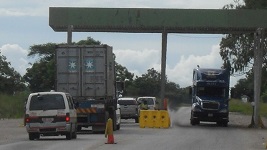 ZIMBABWE – Investigations by The Zimbabwean have revealed that  Alpha and Omega has over 100 vehicles that  are not paying any fees at all tollgate points on the country’s major highways.

Tollgates are owned by the Zimbabwe National Road Administration (ZINARA) and all vehicles except those owned by the state are supposed to pay tollgate fees. Highly placed sources within ZINARA said the first family’s fleet, which includes haulage trucks lorries and small vehicles, were exempted from paying tollgate fees.

Small vehicles pay $2 every time they pass through a tollgate point while lorries and haulage trucks pay $5 and $10 respectively. “All vehicles owned by Alpha and Omega are exempted from paying tollgate fees and we have been instructed to relay this information to all officials manning our tollgate points,” said a senior official within ZINARA

Although ZINARA acting chief executive officer Moses Juma said he was not in position to comment on individual companies, sources within the organisation said ZINARA board chairman Albert Mugabe was related to the first family.

“You have to be aware that ZINARA board chairman is related to the first family hence the directive to exempt all vehicles owned by Alpha and Omega from paying tollgate fees,” another ZINARA senior official told The Zimbabwean on condition of anonymity.

Jorum Gumbo, the new minister of Transport and Infrastructure Development, said he was still new in the post and could not comment on the issue. “I am still new and would need time to find out what is happening and what has been happening,” said Gumbo.

Alpha and Omega is a subsidiary of Gushungo Holdings owned by the first family. The company produces dairy products – milk, yoghurt, juices and ice cream. Sources say it produces about 16 000 litres of milk a day from 850 cows at the company’s Mazowe farm.

ZIMBABWE - Investigations by The Zimbabwean have revealed that  Alpha and Omega has over 100 vehicles that  are not paying any fees at all tollgate points on the country’s major highways. Tollgates are owned by the Zimbabwe National Road Administration...
Share via
x
More Information