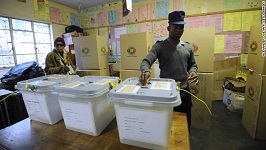 ZIMBABWE – A drought in Zimbabwe has led 3 million people to need food aid in the country. Despite this challenge, plans for massive birthday celebrations for President Robert Mugabe are planned for later this week. It is expected that the 92-year-old will enjoy birthday bash costing roughly $1 million dollars. The juxtaposition of the birthday party against the suffering of millions of citizens encapsulates the worst of a country ruled by a strongman for the past 36 years.

In 2008, Mugabe nearly suffered electoral defeat. Challenger Morgan Tsvangirai won the first round election with 47.9 percent of the vote. It took more than a month for the results to be announced, evidence according to observers that there may have been tampering. In the second round, Mugabe’s political allies used force to quell opposition. Tsvangirai dropped out in protest, but Mugabe sailed to victory with more than 85 percent of the vote.

“There was this moment when we knew Mugabe lost and there were some signals he was going to leave. Results were delayed for a period before there were reports of violence by Mugabe supporters. And then he didn’t leave,” said Todd Moss, a former State Department official and Center for Global Development senior fellow, to Humanosphere. “What are the other things we could have done in that window between knowing he lost?”

A new novel by Moss, Minute Zero, is a sort of re-imaging of the 2008 elections and how the United States may have engaged to spark a change in power. It is the sequel novel to Golden Hour, the first in a series of four diplomatic-thrillers by Moss. Books three and four are set to publish in the fall of 2016 and 2017, respectively.

The story picks up with academic hero Judd Ryker recovering from a coup attempt in Mali and preparing for Zimbabwe’s elections. The story follows his efforts to uncover the various forces influencing the elections and see where there may be an opportunity for a power change. But nothing is easy when it comes to diplomatic maneuvering, especially in a country where there is little interest for U.S. officials.

Competing interests make it difficult for Ryker to garner support in assessing and monitoring the elections in Zimbabwe. From a bad relationship with a department head to an outgoing ambassador more concerned with his next post, Ryker must overcome the kind of roadblocks that diplomats in the U.S. government face on a daily basis. Moss manages to use a little bit of action and intrigue to make a novel about an admittedly dry subject a lot more interesting.

Minute Zero succeeds first and foremost as an enjoyable thriller. The fast-paced novel is in the vein of writers like Tom Clancy and John Grisham. But unlike those two writers, the subject matter of Moss’s novel is couched in reality.

Where Moss really excels is in showing parts of the sausage making process that is diplomacy. He said his aim was to strike a balance between getting things right and making it entertaining to people who may not know how the State Department works or where Zimbabwe is on a map. The novel succeeds in both regards.

As a whole, the novel serves as an argument that the U.S. must fight that indifference. Moss was clear that the role of the U.S. cannot and should not be the world’s police. But, as recent elections in Uganda and Burundi showed, leaders are capable of using non-democratic means to hold onto power. That is in opposition to the values that the U.S. purports to embody – freedom, human rights, and democracy.

He believes that Zimbabwe will be a much better and more democratic country in a few decades. The transition of power from Mugabe to his successor will significantly influence the path of the country. It may become one that can prioritize crises like massive drought and ensure people do not face hunger. Zimbabweans will determine that fate, but the U.S. will have the opportunity to do what history will judge as the right thing.

The minute zero theory touted by Ryker in the book is based on the idea that a small window exists during an election or transition of power where outsiders can influence the outcome. In the case of the book and in real life, Zimbabwe’s disputed elections were a moment uncertainty for the country. That moment is coming again. What will the international community do?

“Zimbabwe is way down on the list of U.S. international priorities,” said Moss. “There is an opportunity for outside forces to have influence, but indifference is really the enemy more than anything else. Indifference is the biggest danger to action.”

Mugabe did manage to stay in power in 2008 and the international community did too little too late to have any real influence. But he will not live forever. A sudden political transition in Zimbabwe is on the horizon.

Members only it’s a private party

Novel parallels reality of Zimbabwe's 2008 elections, with a twist

ZIMBABWE - A drought in Zimbabwe has led 3 million people to need food aid in the country. Despite this challenge, plans for massive birthday celebrations for President Robert Mugabe are planned for later this week. It is expected that the 92-year-old will...
Share via
x
More Information
x