NSSA bosses to face the music 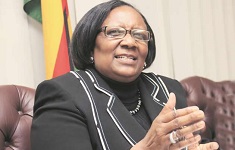 ZIMBABWE – The five National Social Security Authority bosses fired by Government for financial misappropriation may face criminal prosecution for their misdemeanours as it also emerged they awarded themselves over $100 000 in salaries and benefits among a litany of perquisites, Parliament heard yesterday.

Delivering a ministerial statement, Public Service Labour and Social Services Minister Prisca Mupfumira said the recently constituted NSSA board had since enlisted the services of forensic investigators to pursue the case.

“My Ministry has tasked the board to fully investigate and prosecute all cases where wrong doing is proved. We know definitely that there is some criminality on NSSA,” said Minister Mupfumira.

Tabling the salary structures for the executive, Minister Mupfumira said general manager Mr James Matiza was earning a basic salary of $13 768 and benefits of $19 779 giving a grand total of $33 547.

“The general manager also had a company car and 500 litres fuel allowance per month,” she said.

Minister Mupfumira reiterated that the five would not get anything as their packages were not enough to offset what they owed NSSA in loans except for Mr Matiza who bought his vehicle at market value.

Another observation made was that NSSA was paying its costs including salaries from contributions instead of doing so from investments.

Some of the poor investment decisions observed were the Beitbridge hotel whose construction ballooned from an initial figure of $7 million to $45 million.

“NSSA was run like it was a family business,” said Minister Mupfumira.

She said they were working hard to improve he operations system to enable pensioners to earn improved benefits.

On Telecel, Minister Mupfumira said NSSA had assisted Zarnet in the acquisition of a stake in Telecel international by paying the final instalment of $30 million.

“This is not a loan to Zarnet as NSSA has for the intervening period, assumed the rights and obligations of Zarnet,” she said.

She said NSSA Building Society expected to deliver 10 000 housing units would open its doors next month.

Minister Mupfumira said Government ran a legal battle with Mr Matiza recently in respect of Ekhusileni Hospital because he was refusing to surrender its keys as it emerged that he had registered it in his name and some colleagues.

Ekhusileni was constructed by NSSA as a part investment initiative.

Uzumba MP Cde Simba Mudarikwa (Zanu-PF) wondered if there was due diligence on Telecel before the decision to invest was made.

He said Government took 30 days to make the decision meaning that due diligence might not have been applied.

NSSA bosses to face the music

ZIMBABWE - The five National Social Security Authority bosses fired by Government for financial misappropriation may face criminal prosecution for their misdemeanours as it also emerged they awarded themselves over $100 000 in salaries and benefits among a...
Share via
x
More Information