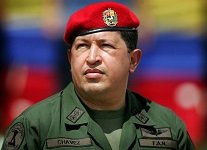 ZIMBABWE – On March 5, 2016 Mother Africa’s children at home and abroad will pay homage to one of their proudest brothers who now has a special space amongst our ancestors, the former President of Venezuela Commandante Hugo Chavez. As this numerical year marks the third anniversary since our dear brother and special comrade physically transitioned from our planet, future generations of peoples in Africa, the Caribbean and Latin America have a larger than life example to follow in their quest for unity, solidarity and good will.

Because humanity’s behaviours are reflections of our thinking, the explanation that Commandante Chavez gave concerning how Africans displaced courtesy settler colonialism and chattel slavery, should be treasured in the manner Christians adopt the 150 Psalms in the Holy Bible and Muslims digest the 114 surahs in the Holy Quran.

“When we were children we were told we have a motherland and that motherland was Spain. However, we have discovered later in our lives that as a matter of fact we have several motherlands and one of the greatest motherlands of all is no doubt Africa. And I am proud to have these lips and hair because they are African”.

While that comment by Commandante Chavez was certainly well received due its anthropological and historical accuracy, which in a broader context was celebrated primarily because the appetite for Africans in the Americas to establish meaningful ties possible is stronger than ever before.

What made the Commandante’s spiritual and cultural love for Mother Africa historically epic, is when he presented President Mugabe the Simon Bolivar award in 2003, Venezuela’s highest political honour. It became abundantly clear President Chavez felt the need to put reactionary, progressive and revolutionary circles alike on notice that when it came to the Zimbabwe question, there would be no teetering and flip-flopping whatsoever in Venezuela.

These bold steps by Commandante Chavez are in harmony with two Shona proverbs, the first “kuziva mbuya huudzwa” which means wisdom comes from others and “Rina manyanga hariputirwi mumushunje” meaning nothing can be hidden forever.

The courageous decision by Commandante Chavez to embrace President Mugabe and ZANU-PF was evidence of how much ideological influence the Cuban revolutionary icon Commandante Fidel Castro has over him in particular and Latin America in general. When Cuba presented President Mugabe with the Jose Marti Award in 1985, the political myth that the revolutionary island was nothing but a cog in the wheel of the Soviet Union was finally put to rest. That bogus assertion automatically suggested that concerning revolutionary solidarity, Cuba was unwilling to embrace any revolutionary country or leader who didn’t have the blessing of the Kremlin.

When modern African history is written from a perspective and narrative rooted in our revolutionary fervour, which means we won’t feel compelled to apologise to our former colonial and slave masters for its content and tone, the decision by both Cuba and Venezuela to celebrate President Mugabe not only as an African hero, but an iconic figure comparable to the most decorated and revered figures in their revolutions have produced, will go an extremely a long way as we march forward together.

As President Mugabe and ZANU-PF watched the response to the 3rd Chimurenga on the world stage, one can only imagine how they collectively perceived the cycle of racism, deceit and hypocrisy that emanated from circles who professed to be compassionate, progressive and in some cases dared to declare themselves revolutionary.

Throughout his tenure as Venezuela’s President Commandante Chavez was adorned with the highest of praises from the who is who of the most distinguished progressive and revolutionary circles inside US borders, the grassroots level, who at the same time when referring to President Mugabe and ZANU-PF, used language even more vitriolic than the British and Rhodesians on the battlefield, as they were seeking to preserve their colonialist and imperialist empire.

Because Commandante Chavez had a military background it comes as no surprise that his government had strong and reliable intelligence at its disposal, it had to be confusing for our great brother to establish and maintain permanent trust in members of the Congressional Black Caucus and TransAfrica Forum, who on the surface embraced Venezuela, but were willing partners of President Bush, aimed at bringing about an illegal and racist regime change in Zimbabwe.

The revolutionary direction chosen by the Governments of Venezuela, Nicaragua, El Salvador, Ecuador and Bolivia commonly referred to as the pink tide, is similar to the manner that Mozambique, Angola, Zimbabwe and Namibia, shook up the world in the days of the Frontline States, which is at the root of the unity that still exists between the SADC nations today.

The emergence of these nations in Latin America exposed that US imperialism prematurely celebrated victory when the Soviet Union collapsed in the early 1990s, because with all the propaganda and sophisticated weaponry at their disposal, the seeds of anti-imperialism were firmly planted in the soil.

It would be extremely difficult to find a speech given by Commandante Chavez between 1999-2013 that did not pay homage to Bolivar, Zamora or Simon Rodriguez. This is identical to how President Mugabe never hesitates to invoke the spirit of virtually every Zimbabwean freedom fighter that is rightfully buried at the National Heroes Acre.

When asked about his political maturation and growth Commandante Chavez said “at 21 or 22 I made myself a man of the left; a major concern of the imperialists are freedom fighters who have a military background, who because of this orientation raise the level of discipline and relentlessness when defending a nation’s integrity and sovereignty”.

Since Mother Africa has been ravaged and polluted by military neo-colonialism we are extremely excited when a freedom fighter that openly rejects the reactionary values that make them pawns of imperialism in the first place, because he is a product Venezuela’s military training, Commandante Chavez will be mentioned along the likes of Gamal Abdel Nasser, Samora Machel, Thomas Sankara, and lastly Zimbabwe’s own Josiah Magama Tongogara.

The forces of US imperialistic reaction are hoping to use the platform of civilised discussion with the revolutionary government of Cuba, to increase hostility towards Venezuela and Zimbabwe, which automatically propagates the notion that if US imperialism places a nation under sanctions, they must truly be deserving.

This dynamic stance allows the venomous rhetoric and activities of the mercenary think tanks, like the National Endowment for Democracy, to pursue regime change in Zimbabwe and Venezuela with a false sense of confidence.

When discussing bilateral relations between Cuba and the US NED mentioned their efforts to, in their words, present the cases of violations of human and civil rights before UN and Inter American Commission Human Rights.

In 2014 NED hosted a US African leaders’ summit that was aimed at raising the political profile of SAPES Trust in Zimbabwe, which was supposed to re-engage and chart a democratic way forward. From its inception SAPES, founded by Ibbo Mandaza, Chinyamata Chipeta and Gilbert Mudenda, has paraded itself as a Pan-Africanist and revolutionary formation that was holding President Mugabe’s feet to the fire.

It would be extremely entertaining, yet necessary to have Mr Mandaza explain to Zimbabwe and the African world why things are so deplorable in Zimbabwe that he has decided to form an alliance with NED.

We have witnessed US-EU imperialism suffer countless defeats in Zimbabwe and Venezuela beginning with a Referendum to oust Commandante Chavez from power and Zimbabwe’s Global Political Agreement that gave the reactionary opposition a chance to show their loyalty and patriotism to the country.

MDC in Zimbabwe for all intended purposes is preparing a much needed dirge, the reactionary opposition in Venezuela aimed at ousting President Maduro will meet the same fate. The one thing we know for certain Commandante Chavez is somewhere smiling on not only his beloved Venezuela, but Zimbabwe as well.

ZIMBABWE - On March 5, 2016 Mother Africa’s children at home and abroad will pay homage to one of their proudest brothers who now has a special space amongst our ancestors, the former President of Venezuela Commandante Hugo Chavez. As this numerical year...
Share via
x
More Information