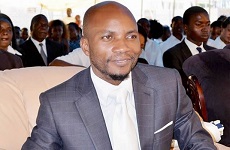 ZIMBABWE – Prophet Walter Magaya of Prophetic and Healing Deliverance Ministries is arguably one the current biggest crowd pullers in the religious circles. It therefore is surprising to find another prophet setting up his tent right on Magaya’s doorstep, so to speak.

Meet Daniel Iluki of VIP Ministries in Christ who styles himself The Big Prophet.

“I am not a public person. I live my life quietly and do not understand why you want to talk to me,” was his intitial reply when approached by The Saturday Herald Lifetsyle for an interview. He, however, relented and agreed to answer some questions.

On why he had decided to set up shop almost opposite Magaya, Iluki said his is not question why but to follow God’s direction.

“When you are under God’s direction you do what life wants you to do. You have no choice.

“It is like a pregnancy though of course I must rely on hearsay for that. But an expecting woman will eat the foods that her pregnancy demands and generally act as it dictates to her.”

Iluki said his church has grown in the shadow of Magaya’s stature and on the day of the interview he had a long queue of people waiting for a one on one session with him at his premises. Like other prophets he distributes holy oil and water.

“This is just ordinary oil. It is the power of prayer that imbues it with strength,” he explained when this writer asked how substances become anointed.

Asked on why prophets are proliferating right now with claims to being able to perform all sorts of miracles and if they are really genuine or just con artists taking advantage of a nation that has gone through some tribulations, Iluki said there are always genuine prophets and fake ones and it is for one to use their spiritual eye to see if they are really spiritually motivated.

“You can’t say all are true or fake, just like their miracles. But you know a tree by its fruit. People who know God can tell. Every spirit must be tested.

“Just like when the US Dollar was introduced in the country some years back, everyone was afraid of getting fakes, but now people know the money and can tell if it is genuine just by feeling a note with their fingers.”

There have been sentiments that most so called prophets are just in it for the money with little intent towards spiritual salvation of souls.

Iluki does not agree: “Look at Prophets Magaya and Makandiwa. What are

they doing when they gather all those crowds?

“They are ministering to the spirit. The money comes from the people and it must be returned to the people because they are the field of God.”

Daniel Iluki is from the Democratic Republic of Congo and has been in the country since 2005. He speaks Shona fluently and is proficient in English.

“I have been to 11 other countries in Africa. My heart is convinced that Zimbabwe is my base. I do not know why but I do not argue with God.”

He said the VIP is his organisation’s name does not denote a demographic target although he can claim high ranking citizens across sectors among his congregants.

“Very Important People are the children of God. It does not matter what you own or do not own. If you give yourself to God, before his eyes you are a VIP.

Iluki is in the process of being married.

be having a white wedding in due course.”

According to this man of the cloth, the clergy should strive to live exemplary lives although being human, they will never be perfect.

“Your own life must portray the vision. It is about the life behind the pulpit not on it. You can only give what you have.”

He says he is a homebody with uncomplicated needs: “I am mostly in my house. I read Christian literature and watch news and religious channels. I like Emmanuel TV, Love World, Christ TV and Yadah TV.”

He fasts a lot and usually partakes of light simple meals.

ZIMBABWE - Prophet Walter Magaya of Prophetic and Healing Deliverance Ministries is arguably one the current biggest crowd pullers in the religious circles. It therefore is surprising to find another prophet setting up his tent right on Magaya’s doorstep...
Share via
x
More Information
x