Opposition in sympathy after Mugabe near-fall 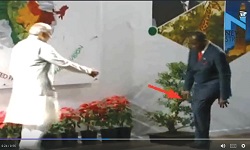 ZIMBABWE –  was an outpouring of sympathy from across the political divide following reports that President Robert Mugabe almost fell over backwards on Thursday as he tried to climb onto a one-step dais, with Indian Prime Minister Narendra Modi and some aides rushing to his rescue in New Delhi.

A video showing Mugabe tumbling and breaking the fall has now gone viral on social networks, including Facebook and WhatsApp.

“President Mugabe’s physical and mental mishaps in the past one year have proven beyond doubt that he is no longer fit to continue in office. Ninety-one years is no joke. Even Zanu PF cannot come up with any tricks to reverse it,” he said.

“Mugabe should unconditionally step down in the interest of a starving nation. He is turning Zimbabwe into an international joke each time he steps onto the international arena.”

MDC-T spokesperson Obert Gutu said at 91, it was clear Mugabe was not a young man anymore and he deserved to rest.

“In our African culture, we are taught to respect our elders. So we can never celebrate whenever an elderly person does something embarrassing, particularly in public,” Gutu said. “As the MDC, we reiterate our call that the President should proceed to step down because he is now too old to effectively manage the rigours of Presidential duties and assignments.”

Gutu said there were selfish officials in Zanu PF out to abuse Mugabe.

“Obviously, selfish people in Zanu PF are abusing the President. They want him to hold on to power not because they love him or like him. They are doing it for their own selfish agendas. They are busy looting and stripping the country of its resources and assets while hiding behind the ‘Gushungo for Life President’ mantra. Most of these politicians in the so-called G40 faction of Zanu PF are seasoned crooks and dealers. They will do anything for money,” Gutu added.

People’s Democratic Party spokesperson Jacob Mafume said Zimbabweans should be ashamed of exposing Mugabe to the international world “at this age”.

“We have maintained that old age is an illness humanity has failed to cure and when old people get to that age, they are ill. It’s an embarrassment to have a person who can’t walk on his own as President,” Mafume said.

“We can’t have people celebrating that your President has walked 50 metres. It’s not only an issue of concern, but an issue of national security and the nation must bury its head in shame that our best foot forward is a 91-year-old person.”

However, Zanu PF spokesperson Simon Khaya Moyo accused the private media of misleading the nation and asked NewsDay to read an article in the State media where he was quoted criticising the independent Press for writing negatively about the First Family.

Opposition in sympathy after Mugabe near-fall

ZIMBABWE -  was an outpouring of sympathy from across the political divide following reports that President Robert Mugabe almost fell over backwards on Thursday as he tried to climb onto a one-step dais, with Indian Prime Minister Narendra Modi and some a...
Share via
x
More Information