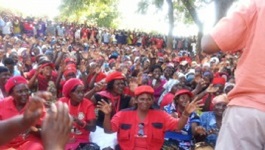 ZIMBABWE – The Tendai Biti-led People’s Democratic Party (PDP) is calling for the setting up of a transitional authority before Zimbabwe holds its next general elections.

The party argues that it won’t be tenable to hold an election without first cleaning up various institutions like the Zimbabwe Electoral Commission and related bodies that play a critical role creating a democratic state.

For perspective, Studio 7 with Obert Gutu, spokesperson of the Movement for Democratic Change led by Morgan Tsvangirai, and Jacob Mapfume of the People’s Democratic Party, who said a national transition authority is the only way of resolving Zimbabwe’s current political crisis.

He added that “the government is teargassing ministers and so teargassing itself. So, let us have a transitional government where will we stop this madness and remove the toxicity.”

But Gutu said, “We don’t want to rush and have positions to say let us have a transitional government. You can see that some of our colleagues, with due respect to them, they know that they are small, with due respect, they know that they do not have the numbers. That’s why they are quick to say let us have a government so that they can have some (cabinet) positions.”