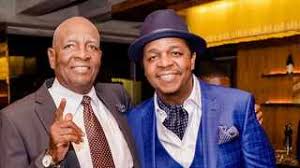 Esaph Mdlongwa who was one of the founding members of MDC and it’s first organising secretary died on Wednesday at Mater Dei Hospital.

Mdlongwa also became MP for Pumula-Luveve constituency during his years of being active in politics.

Oskido took to his social media accounts to reveal the news.

He wrote on his Twitter and Facebook accounts, “It is with great sadness to let you know that I have lost my old man due to Covid-19, a great man who inspired me to understand the value of life.

“So long mdala, rest well. I will see you again in the next lifetime. You have showed us a way and shone the light. Akwehlanga lungehlang.

Tributes have continued pouring in for the trade unionist and politician.

MDC-Alliance president, Nelson Chamisa who was part of the core team during the formation of MDC together with Mdlongwa described the late Mdlongwa as a man of integrity, courage and honour.

“Saddened..The passing on of the MDC founding National Organising Sec, Umdala Esaph Mdlongwa is a blow to us. A man of integrity, courage and honour all wrapped in humility and simplicity. We worked with him as we formed and built the great party that we have become. RIP Big Man.”

Welshman Ncube, who is the vice president of MDC-Alliance described as” a giant of a man” while also acknowledging the role the former Pumula – Luveve MP played in mentoring him.

Other politicians who have sent condolence messages include Thokozani Khupe and Priscilla Misihairabwi among others.

Oskido Confirms That His Father Succumbed To Covid-19

BULAWAYO - Kalawa Jazmee founder, Oscar 'Oskido' Mdlongwa has confirmed that his father, Esaph Mdlongwa succumbed to Covid-19 on Wednesday. Esaph Mdlongwa who was one of the founding members of MDC and it's first organising secretary died on Wednesday a...
Share via
x
More Information
x