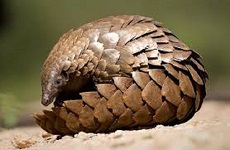 ZIMBABWE – At least four suspected poachers of the rare ground pangolin have been arrested in Zimbabwe in separate incidents in the past week, conservation groups reported.

Conservationists and wildlife lovers were trying to raise awareness of the plight of the endangered scaly anteater ahead of World Pangolin Day on Saturday.

In one case, suspected poachers operating near Zimbabwe’s northern border with Mozambique were caught late Thursday allegedly trying to sell two young male pangolins for $5 500, according to the Matusadona Anti-Poaching Project (MAPP).

That represented a significant sum in a country where civil servants earn less than $500 per month.

The Tikki Hywood Trust said the pair was intercepted in Rushinga district in Mashonaland Central, more than 200 km from the Zimbabwean capital Harare. A “gentle adult male pangolin” was reportedly rescued.

The trust, based in Harare, was understood to be caring for the pangolins that have been recovered.

Earlier this month, it signalled its alarm at the growing pangolin trade in Zimbabwe.

“We have rescued 11 pangolins this year, our concerns are growing at this alarming number that just seems to continue,” the trust said in a post.

Pangolins are shy noctural mammals with a five-month gestation period.

Their body parts, particularly their scales, are valued in traditional Asian and African medicine.

Because numbers of pangolin left in Asia are now so low, illegal traders are increasingly turning to Africa for supplies, MAPP says.

Up to 100 000 African pangolins were reportedly poached each year.

Zimbabwe imposes a nine-year jail sentence on those convicted of poaching pangolin.

Two Zimbabwe police officers were caught trying to sell a pangolin to a businessman in November.

Zimbabwe Is Selling Its Baby Elephants for $40000 a Pop

Army ruckuses a threat to democracy

ZIMBABWE - At least four suspected poachers of the rare ground pangolin have been arrested in Zimbabwe in separate incidents in the past week, conservation groups reported. Conservationists and wildlife lovers were trying to raise awareness of the plight o...
Share via
x
More Information
x