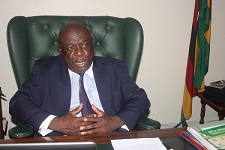 ZIMBABWE – Parliament gobbles at least $1,6 million every month to fund sessions for members and their accommodation, Clerk of Parliament Mr Kennedy Chokuda has revealed.

There are about 300 backbenchers.

Mr Chokuda told Members of Parliament who attended the pre-Budget seminar in Victoria Falls that Government resources were insufficient to meet all their requirements.

He said MPs had to look for development partners to complement budgetary allocations from Treasury.
“When budgeting for the sittings of Parliament, for you to sit just for one week, we require about $420 000,” he said.

Mr Chokuda said the budget for the legislature catered for both the administration of Parliament and MPs’ business.
He said to supplement the resources from Treasury, Parliament administration had engaged development partners who had come on board.

He said most of the funds would be directed towards the work of portfolio committees.
Mr Chokuda said support from development partners was in response to Finance Minister Patrick Chinamasa’s efforts in engaging the international community.

He said Parliament had reduced its domestic and international debts after receiving money from Treasury.
He, however, said arrears with the Sadc Parliamentary Forum needed to be settled as a matter of urgency.
Mr Chokuda said Parliament owed its creditors about $5,5 million with part of the debt dating back to 2013.

He said clearance of outstanding debts had, however, not been provided for in the proposed 2016 budget.
Mr Chokuda said inadequate funding had resulted in the withdrawal of services, litigation and failure by parliamentary committees to carry out their duties.

Humanity we could teach America