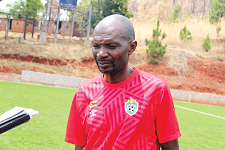 Pasuwa was a fans’ favourite after leading the Warriors to the Chan finals on a shoestring budget and his picture boarding a bus while carrying a blanket en route to Malawi remains etched in many football followers’ minds.

Zifa announced last night they had sacked Pasuwa and his entire technical staff, after they demanded the association settles their dues.

The technical team and players, who were preparing for the Chan finals, to be played in Rwanda next year, also demanded allowances for their time in camp, which started this week.

The squad has been in camp since Monday and they had their normal training sessions yesterday in the morning and afternoon.
After failing to reach an agreement with the coaches and players, Zifa responded by wielding the axe.

Antipas will be assisted by Dynamos coach Tonderai Ndiraya and Mandla Mpofu, with Peter Nkomo coming in as the goalkeepers’ coach.

Wellington Mupandare is the new team manager, while Cosmas Zulu has been listed as fitness manager.

A statement from Zifa read: “At an extraordinary meeting of the Zifa national executive committee on 17 December 2015 at Harare, it was resolved that the entire technical team for the national team headed by Kalisto Pasuwa be relieved of its duties. National team camp is hereby dissolved with immediate effect and new camp dates will be announced in due course.”

Earlier in the day, Zifa acting president Omega Sibanda had released a different statement, saying coaching the national team was a privilege, adding that coaches and players would not be allowed to hold the association to ransom.

“The Zimbabwe Football Association would like to categorically state that national duty call-up is a privilege, which no patriotic Zimbabwean can turn down,” the statement read.

“The association will continue to extend invitations to players and coaches eligible to do duty for Zimbabwe. The PSL is endowed with highly qualified technical personnel boasting of Caf licences and shall not be short of qualified technical expertise.

“The association is currently carrying out an audit of technical expertise in all association leagues with a view towards considering for placement those qualified to take up national team duties.

“The nation should rest assured that players and technical personnel who heed to the international duty call-up shall be rewarded for their sacrifice and commitment.

“At no time shall the association allow players and the technical officials to hold the nation to ransom over allowances.”

Pasuwa had led the team to a good start in the Afcon qualifiers with four points from two games, which had given reasons for optimism in a group that includes Guinea, Malawi and Swaziland.

Together with his assistants Nation Dube and Saul Chaminuka, they led the team to the Chan finals.

Antipas and his team’s immediate task is to assemble their own squad and resume preparations for the Chan finals starting on January 16.