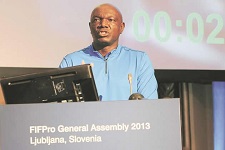 ZIMBABWE – Former Zimbabwe international Paul Gundani feels the country’s ex-footballers are terribly letting down the national game and leaving it at the mercy of pathetic administrators who have dragged it into a quagmire.

Gundani, a member of the Reinhard Fabisch’s Dream Team that wowed the nation in the ‘90s and came within a game of qualifying for the ‘94 World Cup, believes the time has come for former footballers to take control of their game.

The Footballers Union of Zimbabwe secretary-general yesterday wrote an open letter saying he could not watch from the sidelines anymore, as people who had no clue about running the game, continue to drag it down the pit of darkness.

His comments come in the week that ZIFA councillors are set to meet in Harare on Saturday where a motion, to revoke the mandate of the current leadership headed by Cuthbert Dube, will be tabled.

Twice, this year, Dube has survived the move to recall him, just 18 months after the same councillors handed him a second four-year term to lead domestic football, on a technicality.

But the Harare business executive and his board appear set to be stripped of their powers, unless something dramatic happens in the next few days, with the same councillors who tried to boot them out, the last time they met three months ago, intent on doing just that on Saturday.

The meeting comes against the background of a looming ban, where Zimbabwe could be barred from playing at the 2022 World Cup in Qatar, unless ZIFA settle their long-standing debt to former Warriors coach Tom Saintfiet by the end of the year.

Zimbabwe’s Warriors have already been booted out of the 2018 World Cup for failing to pay Brazilian coach, Valinhos, who was the Warriors gaffer during the 2010 World Cup/Nations Cup qualifiers.

Now, ZIFA have to pay Saintfiet $180 000, for just working here for a day when he conducted two training sessions, before he was thrown out of the country by the immigration authorities for working without a work permit.

The Belgian was contracted by Dube and his leadership in 2010, ahead of the 2012 Nations Cup qualifiers, in a move that strained relations between ZIFA and their Namibian Football counterparts, who described the local football authorities as a “leadership of fools,” and even spilled into the political corridors.

Chipo Zindoga, who was the country’s ambassador to Namibia during that fallout, wrote to Foreign Affairs Secretary, Joey Bimha, that the issue had snowballed into a political one that needed to be handled carefully.

“The issue is refusing to die a natural death. This is the reason I am bringing it to your attention. The secretary-general of the Namibia Football Association, Barry Rukoro, has launched an all-out attack against the ZIFA Board over the ‘poaching’ of Tom Saintfiet as the new Warriors coach,” Zindoga wrote.

“Rukoro, who has declared a war path against ZIFA, has indicated that NFA will lodge a formal complaint with FIFA against ZIFA for not adhering to the rules of football.

“NFA will also undertake to claim US$30 000 in compensation before releasing Saintfiet’s termination letter. While the NFA had previously lumped the blame on the Belgian-born coach for breach of contract, the blame has now been shifted to the ZIFA board, whom Rukoro is referring to as ‘a leadership of fools.’

“He is further quoted as saying, ‘they think they are untouchables and we are just going to fold our arms just because they are Zimbabweans.’ It is clear from the outset that ZIFA’s appointment of Saintfiet had caused a furore within Namibia football circles.

“The latest developments point to intense hostility that, if not handled amicably, will mar the cordial relations existing between the two countries.

“The Saintfiet issue is certainly assuming political dimensions with far reaching political ramifications, which calls for prudent handling of the matter. To further note is that Rukoro has been successively re-elected to the post of NFA secretary-general, an indicator of his popularity in Namibia. His sentiments are therefore shared by the generality of Namibians.

“We, therefore, cannot afford to take the issue lightly.”

Yesterday, Gundani wrote an Open Letter to his fellow former footballers and said the time had come for them to now rescue their game from those who have taken it onto its death bed.

“Our game, which most of us started playing in our teens, is now in a comatose state. We were brought up all our lives in it and it is the only activity that we have been exposed to most of our lives,” wrote Gundani.

“We have worked tirelessly as players to build the reputation Zimbabwean football had in the past. The reputation of the game is in tatters and no solution of reversing the rot is in sight.

“Most of us former footballers toiled the better productive part of our lives, working hard as players, to improve the status of the game in Africa and beyond. Our efforts seem to have earned us nothing as we continue to watch the administration of the game on the sidelines.

“Because of our wrong perception that we must be coaches at retirement, the administration of the game has over the years been left in the hands of those who are said to have funds, but greatly lack knowledge of it.

“We have let down the development of the game by choosing to continue being workers instead of taking the over the management or administration of the game. There is no one else who can assist us to be part of the national association except ourselves.”

Gundani said they owed it to future generations to get things right now.

“We have a responsibility to improve the game for the benefit of future generations. We cannot allow failure to continue in the game we have worked in for the greater part of our lives. It is a shame that we continue to be used by those ignorant of the game, who sow discord amongst us, so that we remain divided,” said Gundani.

“Amongst us the former footballers, we have capable and reputable leaders who can bring out our game from the current state of affairs, to its respectable position in Africa. We do not need funding from an individual, but from Government and the corporate world.

“The two institutions I have mentioned can only do so if our game is properly managed. Football if properly managed along business lines, generates the funding required through sponsorships. It is an industry capable to raise resources required to take care of its liabilities.

“For once, let us pull in the same direction and work towards the development of our game. A game we have all dedicated our lives to work for. It is us the former footballers who can guarantee the future generations of a bright future by fighting to have the involvement of former players in main stream football administration.

“We cannot all of us be involved, but let us fight for those with the necessary knowledge to be included.”

ZIMBABWE - Former Zimbabwe international Paul Gundani feels the country’s ex-footballers are terribly letting down the national game and leaving it at the mercy of pathetic administrators who have dragged it into a quagmire. Gundani, a member of the Rein...
Share via
x
More Information
x