Photos of Tsvangirai relaxed with women at a park cause storm, MDC-T leader forced to explain 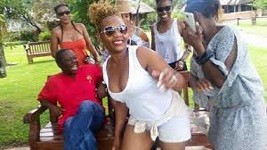 ZIMBABWE – Former Prime Minister and MDC-T leader Morgan Tsvangirai has defended a set of controversial pictures of him taken with scantily dressed women at a Gweru park last weekend.

The pictures apparently sparked a storm and brought back into the spotlight stories of the former premier’s improper association with women, forcing him to explain.

Tsvangirai, Wednesday, took to micro-blogging site twitter to defend what he called was nothing sinister but a president at peace with his people.

Wherever I go in Zimbabwe, supporters ask to have photos taken with me and I have no reason to deny them a photo with their president.

I had photos taken with a lot of people in Gweru over the weekend including a group of ladies coming from our meeting. I have done that on so many occasions and I don’t know why with 1000s of photos of myself with supporters, this could be called a scandal, Tsvangirai said.

They should rather be focusing on the national of despondency, suffering and a crisis facing the people. (Than) scandalising a president who is accessible to party supporters, where is your photo with your president after the rally?

Zanu PF MP and politburo secretary for science and technology, Jonathan Moyo, pulled no punches in an exchange with MDC-T spokesperson Obert Gutu.

My friend brother @GutuObert as MDC-T spokesman what’s the official take on these sights from Legends of the Park? Moyo asked.

Those pics are inconsequential. We should discuss more serious issues guys. Is it an offence to pose for a pic with fans and supporters? Nothing indecent about that pic, said Gutu who earlier on had claimed the images were photo-shopped.

Moyo was not done just yet.

Thank you my brother for confirming their authenticity. Have a great day! Of course not. Great pictures indeed. Legend of the Parks! Of-course. His (Tsvangirai)’s open zip reputation is well known. From Legends of the Seas to Legends of the Parks. Handei tione! Indeed. Morgiza has serious zip governance challenges! jabbed Moyo.

Following the unfortunate death of his wife Susan in a car accident in early 2009, Tsvangirai has been associated with a litany of women including the embarrassing incident before he married his current wife Elizabeth in which he reportedly married Locardia Karimatsenga Temba traditionally before a nasty fall-out for which he was forced to pay over $200, 000 in damages.

In one of the photos that came out in 2012, the MDC-T leader appeared relaxed with a woman on cruise ship called the Legend of the Seas in Singapore.

Photos of Tsvangirai relaxed with women at a park cause storm, MDC-T leader forced to explain

ZIMBABWE - Former Prime Minister and MDC-T leader Morgan Tsvangirai has defended a set of controversial pictures of him taken with scantily dressed women at a Gweru park last weekend. The pictures apparently sparked a storm and brought back into the spotli...
Share via
x
More Information