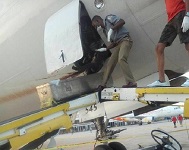 ZIMBABWE – The body of a dead person found in a Western Global Airlines cargo plane destined for Durban, South Africa on Sunday has been taken for a post mortem, the Zimbabwe Republic Police has confirmed.

Police also confirmed that the plane’s cabin crew was still in the country but refused to divulge their exact location for security reasons.

The plane was impounded at the Harare International Airport where the dead body was discovered. Also found on the plane was money destined for the Reserve Bank of South Africa.

It is understood that the investigations are covering a number of areas as the matter is shrouded in mystery.

The investigations are aimed at establishing how the person died and why the plane ended up landing in Harare with a corpse on board.

Police have also engaged the services of Interpol to establish the nationality of the deceased person.

Further, the investigations seek to establish whether the body is not carrying viruses that may cause the spread of diseases here.

It is understood that the body was in an advanced stage of decomposition.

Again, it is believed that what had been initially suspected to be blood dripping on the plane could actually be a combination of human fluids associated with a decomposing body.

What had so far been established is that the body is of a black person.

Reports on Sunday indicated that the plane requested for a technical landing after an initial landing request in Mozambique was turned down.

Said Snr Asst Com Charamba: “Investigations are still going on, and the cabin crew is around. We have engaged Interpol to establish the nationality of the dead person found on the plane. We want to establish why the plane ended up landing here with a dead body.”

However, indications are that there might be an untold story on why the plane ended up landing in Zimbabwe.

Information availed to The Herald by a source based in Germany (name withheld) showed that the plane landed in Munich, Germany on Saturday at 2:45pm and took off at 9:01pm the same day on the non-stop flight to Durban, South Africa. It was not clear where it was coming from when it landed in Munich.

She said when the investigations were completed, they would give a comprehensive report.

South African Ambassador to Zimbabwe Vusi Mavimbela yesterday said: “Zimbabwean authorities are still questioning the crew members as to why the plane ended up here and why it was carrying a dead body. They spent the whole day questioning them. We are waiting for a report from the authorities after they complete their investigations.”

Western Global Airlines is based in southwest Florida, United States of America and operates a fleet of 16 MD11 freighters, a modern stretched upgrade of the old DC10, according to its website.

The private cargo line is owned by James and Sunny Neff and advertises that it has a good range of customers, including FedEx.

It said aid agencies chartered it to fly staff and supplies into West Africa last year to fight the Ebola epidemic.

ZIMBABWE - The body of a dead person found in a Western Global Airlines cargo plane destined for Durban, South Africa on Sunday has been taken for a post mortem, the Zimbabwe Republic Police has confirmed. Police also confirmed that the plane’s cabin cre...
Share via
x
More Information
x