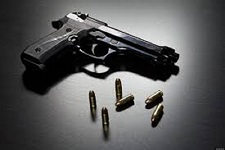 Kenneth Mukoroverwa, 36, pleaded not guilty when he appeared before Mbare magistrate Bianca Makwande charged with assault and pointing a fire arm.

Mukoroverwa will be back in court on November 26 for judgement

It is alleged that on September 18, Rophias Kumbana, 34, was left to guard a church premises and he heard someone closing the church door and gate.

Kumbana is said to have went on to take a video of Mukoroverwa as evidence and when he approached him he turned violent.

Mukoroverwa is said to have pointed a pistol at Kumbana and threatened to kill him.

Kumbana then lodged a complaint with the police leading to Mukoroverwa’s arrest.

Blessing Kajesi appeared for the State.

Conductor assualted over US$5

Zimbabwe hunting body vows to self-regulate after Cecil the Lion

Pointing gun to security guard lead man to get arrested

ZIMBABWE - A Chitungwiza man has been arrested for pointing his pistol at a security guard after he had been asked to answer to his trespassing Kenneth Mukoroverwa, 36, pleaded not guilty when he appeared before Mbare magistrate Bianca Makwande charged wi...
Share via
x
More Information
x