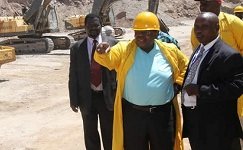 ZIMBABWE – Police has allayed fears of more deaths at the collapsed Chiadzwa mining shaft as only three bodies were retrieved from the rubbles on Wednesday.

Speaking during a tour of the site where the illegal panners were trapped in a shaft on the banks of Makodzi River yesterday, the officer commanding Operation Hakudzokwi, Assistant Commissioner Ali Simbarashe Hondo, said they had managed to retrieve three bodies that were all positively identified by their relatives from Buhera.

“One of the panners came to our base on Tuesday night at around 10.30pm and informed us of the incident. Since it was dark, we deployed our members to cordon off the area. We moved to the site at around 8am and we could see a hand of one of the trapped miners.

“Since the area was covered with water, we had to summon members of the sub-aqua unit from Changadzi who combed the water for more bodies, but failed to retrieve any. Having been satisfied that there were no bodies in the water, we created a waterway to clear the water. We then placed rubbles to enable an excavator to retrieve the bodies. Only three bodies were retrieved from the rubbles,” he said.

Asst Comm Hondo added: “Since all the panners knew each other, some of them rushed to their respective homes in Buhera and informed the late panners’ relatives about the incident. We retrieved the dead bodies in the presence of their relatives who positively identified them.”

Asst Comm Hondo said the panners had taken advantage of the vastness of the area to sneak into the diamond mining fields.

“We have deployed our manpower in all strategic areas, but because of the vastness of the area some of the panners are sneaking in.

We will continue beefing up our deployments to ensure that the fields are completely sealed off,” he said.

Cde Chimene said it was regrettable to lose lives in such horrible circumstances.

“We are here on a fact finding mission because there were conflicting reports on the number of deaths recorded during this unfortunate incident. We do not know where the wild figures of the deaths were coming from. Some were saying 15, some 20, while some were saying 12 and this prompted us to get on the ground to get the true picture. It is regrettable that people have lost lives, but we want to warn people to stay away from illegal activities.

“Why should you risk your lives for a few dollars? Those harbouring thoughts of breaching security measures here should be warned that the law enforcement agents will deal with them accordingly. This is a national resource which should benefit everyone and not a few individuals,” she said.

Cde Chimene called for patience among villagers from surrounding areas, saying they would also be considered for employment at the newly consolidated mine.

“We should allow Government to complete this consolidation exercise. Everyone will be considered for employment. This process will take a bit of time and people should be patient,” she said.

Headman Chiadzwa said they would continue carrying out awareness campaigns on the dangers of engaging in illegal activities.

“It is sad to note that this incident happened barely 24 hours after we had held an awareness campaign with the people here. What is also worrying us is that strangers are the ones who are dying in our areas as our locals are proving to be law abiding citizens.

“At the same time, we call for more deployments here so that the areas should be completely sealed off. Law enforcement agents should not hesitate to descend heavily on all trouble makers,” said Headman Chiadzwa.

Zimbabweans have no plan to remove Zanu PF: Mwonzora

ZIMBABWE - Police has allayed fears of more deaths at the collapsed Chiadzwa mining shaft as only three bodies were retrieved from the rubbles on Wednesday. Speaking during a tour of the site where the illegal panners were trapped in a shaft on the banks o...
Share via
x
More Information
x