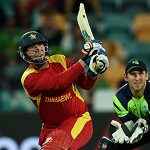 Taylor was partying on Thursday night as his side Nottinghamshire progressed to the semi-finals of the Royal London Cup and then he landed up in the car.

He was woken by police after a Nottingham man opened his unlocked car to find him sleeping off a long night, reports ESPNcricinfo.

Taylor had taken shelter in the car having lost his bearings several hours after Nottinghamshire’s quarter-final victory against Durham.

Nottinghamshire have yet to make a statement on the incident..