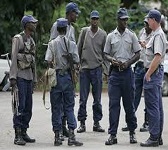 ZIMBABWE – A Queens park police officer has been arrested for trespassing and stealing a laptop.

Chanda will be back in court on November 18 for trial.

It is alleged that on November 3 Chanda went to Antony Moore, 23,’s residence when no one noticed.

Chanda is said to have went on to enter into Moore’s house after realizing no one had been present.

The court heard that Chanda went on to steal an Acer laptop worth US$350 which had been left on Moore’s bed and fled.

Moore then lodged a complaint with the police after he arrived home and discovered his laptop had been stolen.

Moore is said to have discovered the person who stole his laptop when his neighbour told him she had seen Chanda sneaking out with a laptop.

Chanda was arrested after he had been identified as the person who stole the laptop.

Anna Nyagumbo appeared for the State.

ZIMBABWE - A Queens park police officer has been arrested for trespassing and stealing a laptop. Tawedzerwa Chanda, 24, pleaded not guilty when he appeared before Mbare magistrate shelly Zvenyika charged with unlawful entry. Chanda will be back in court on...
Share via
x
More Information
x