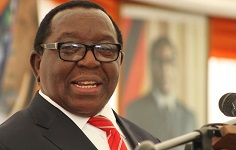 ZIMBABWE – Zanu-PF has banned its members from using social media to communicate party issues and anyone who defies the directive will be dealt with in line with the party’s rules and procedures.

The party also ordered its members to stop using conventional media on party business without authorisation.

The ban comes in the wake of hyper-tweeting by Higher and Tertiary Education, Science and Technology Development Minister Professor Jonathan Moyo, attacking fellow Cabinet ministers and Politburo members as well as issuing veiled threats on journalists on social media.

This came out of the party’s first Politburo meeting for 2016 held in Harare yesterday.

Speaking to journalists after over 10 hours of intense and frank discussions at the party headquarters, the Zanu-PF secretary for information and publicity Cde Simon Khaya Moyo said the party also reiterated that it had one centre of power in President Mugabe who is the only elected leader at congress.

“Expressing oneself through the press including using of social media must stop with immediate effect,” said Cde Khaya Moyo.

“Leadership calls for responsibility and not for rumour-mongering and insults. The party has structures and procedures to be religiously adhered to. The party is not run through the press, so we are not allowing any member of the party at whatever level to run the party through the press. We must maintain and safeguard our party principles and we must never lose focus so said the President.

“We must always exercise introspection and check within yourself whether what you are saying is based on any facts. In life, there is always room for compromise should you have any differences.

“There must be some degree of maturity based on the party’s principles and procedures. There must be constructive talk all the time. In other words, do not just engage in discussions without being constructive and therefore, talk must be guarded.

“If they (party leaders) don’t listen to these messages, appropriate action will be taken naturally. Anyway, we have structures to deal with that.”

On factionalism, which dominated media headlines in the recent weeks, Cde Khaya Moyo said: “Factionalism must never be allowed in the party because we only have one centre of power. The party’s motto is unity, peace and development.

“Contradictions are possible in such a massive party but these must never be antagonistic as been happening recently. Difference of opinion must never be perpetuated at any given time.”

Cde Khaya Moyo said the Politburo received a report on disciplinary hearings but it was deferred it to the next Politburo meeting.
He said this was to allow for hearing of all cases before any decision is taken.

“The National Disciplinary Committee report was not yet complete and the cases before it will be heard by the said committee through some hearings from those affected,” he said.

“In other words, those affected would be written to, for the hearings before the NDC for presentation to the next Politburo meeting. They will be reporting soon after the hearings.

“There must be a hearing, people should not just be suspended. They must be heard also – what is your story?”

He said Cde Patrick Chinamasa, who is the secretary for legal affairs, presented a report on the resolution of the 15th National People’s Conference held in Victoria Falls last December.

“In line with the agenda, the secretary for legal affairs, who is also Minister of Finance and Economic Development (Cde Chinamasa) gave an update on Zim-Asset.’’

Secretary for administration Cde Ignatius Chombo tabled a post-mortem report of the conference which was unanimously accepted by the Politburo.

In his welcoming remarks, the President implored members to examine issues with depth, focus and debate matters with facts.
“He (Cde Chombo) also gave a projection on the state of administration for 2016 which should be finalised in due course,” said Cde Khaya Moyo.

“He should also give a report again on Zim-Asset’s implementation so that we are all aware of the progress being made.

“The secretary for youth affairs, Cde Pupurai Togarepi gave a comprehensive report on preparations for the 21st February Movement celebrations to be held in Masvingo on 27 February.

“Secretary for external affairs Cde Simbarashe Mumbengegwi gave an external affairs report highlighting the standing ovation President Mugabe received from other Heads of State and Government on his address at the recent AU Summit.

“He also spoke eloquently on the reform of the United Nations Security Council and reported on the Palestine and Saharawi (Arab) Democratic Republic.

“The President received outstanding ovation for his focus on development of the continent. Members’ contributions were upped up so that by the end of 10 years from now, we are able to pay all our subscriptions without relying on our erstwhile colonisers.”

Cde Khaya Moyo said the national commissar Cde Saviour Kasukuwere gave a report on the functioning of the commissariat department.

He said he reported that the party, so far had won all by-elections, including council elections.

ZIMBABWE - Zanu-PF has banned its members from using social media to communicate party issues and anyone who defies the directive will be dealt with in line with the party’s rules and procedures. The party also ordered its members to stop using conventio...
Share via
x
More Information
x