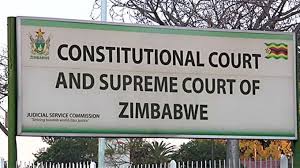 ZIMBABWE – Hilton Chironga, a political violence survivor, together with Heal Zimbabwe, a non Governmental organisation that Champions for national healing and reconciliation, have won a historic court case against the state after the Consitutional Court ordered government to implement section 210 of the constitution which provides for the setting up of an Independent Complaints Mechanism.

The Independent Complaints mechanism is constituted to hear and investigate complaints from the public concerning misconduct by members of the security services as well as remedies for any harm caused.

The order was given after four and a half years since the matter was heard.

Hilton Chironga said “the order to compel the government to gazette a Bill for Section 210 is a relief for survivors of violence, spanning from as early as 1983 throughout to the 23rd of September when the order was issued.

“Since 1983, our uniformed services have been active in committing heinous atrocities and the individuals have not been held to account…”

The country has a history state sponsored violence against citizens especially at the height of political contestations. Between 1983 and 1987, the Fifth Brigade was deployed in Midlands and Matebeleland in what has been known as Gukurahundi. According to the Catholic Commission for Peace and Justice in Zimbabwe (CCPJZ) more than 20 000 people were killed during the disturbances.

In 2008, violence against members of the Movement for Democratic Change (MDC) was witnessed leaving over 300 people dead.

Recently an independent commission of inquiry was set up in relation to August, 1 shootings where the army openly fired live bullets at unarmed citizens, killing some as citizens were protesting against a delay in the announcement of election results.

… As court orders govt to act on Section 210 of the constitution ZIMBABWE - Hilton Chironga, a political violence survivor, together with Heal Zimbabwe, a non Governmental organisation that Champions for national healing and reconciliation, have won a hi...
Share via
x
More Information
x