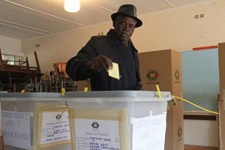 ZIMBABWE – Demands for the changes have been on the agenda for opposition political parties since the last elections which were held on the 31st July in 2013.

Some of the reforms the opposition want include the adoption of a biometric voting system and a new voters’ roll which they say should be availed to them three months before the election date. They also want to be given equal coverage by the state broadcaster during the campaign period.

Addressing Journalists soon after his party’s management meeting in Harare Thursday, PDP President Tendai Biti said they are working on a lawsuit against government over the delayed electoral reforms.

“We will be going the courts on a number of issues which include the demand for the current voters’ roll,” he said.

“We find it unacceptable that the new constitution makes ZEC the sole custodian of the voters’ roll; but even up to now they do not have custody of that voters’ roll and we find this as unpardonable.

“So we will be raising that in the courts and a number of other things which I have no mandate to anticipate but we will be filing an application around elections.”

Biti said the reluctance by Zanu PF to institute electoral reforms was a ploy to rig the 2018 election.

“By operation of the law elections should be held on 31 July 2018 which is less than 40 months from now and in normal countries that would actually mean that the election season has started,” he said.

“Right up to now ZEC does not still have the 2013 voters’ roll in their computers and they failed to produce it when ZAPU made a successful application in the High Court last year.”

ZIMBABWE - Demands for the changes have been on the agenda for opposition political parties since the last elections which were held on the 31st July in 2013. Some of the reforms the opposition want include the adoption of a biometric voting system and ...
Share via
x
More Information