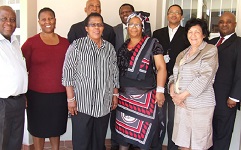 ZIMBABWE – Chitungwiza Residents’ Trust on Tuesday appeared before the Parliamentary Portfolio Committee (PPC) on Local Government, Public Works and National Housing on behalf of the residents.

Chitrest had been invited by the committee to give the residents’ perspectives on the quality of service delivery by the local authority.

Before the committee, Chitrest “raised social service provision challenges ranging from shortages of safe and clean potable water in Chitungwiza, poor and inconsistent refuse collection and waste management by the Municipality owing to a rundown refuse collection fleet and a poor road network.

“Recurrent and unattended burst sewer pipes due to reliance on a dilapidated sewer system which does not match the recent population growth trends, absence of a land and housing policy framework for Chitungwiza, continued surfacing of informal settlements leading to reactionary forced evictions and house demolitions by the Municipality, a sub-standard healthcare delivery system and the non-transparent operations of Clyna Africa trading as Parkrite among other issues.

“Parkrite is a private company contracted by the Municipality to look into vehicle parking and vending management in the town,” said Chitrest.

The residents also said that they pleaded with the parliamentarians to “urgently intervene in Chitungwiza as the local authority was struggling on its own due to the numerous challenges and the nature of problems bedeviling the third largest urban population in Zimbabwe.”

And the PPC is said to have pledged its support for the suffering masses of Chitungwiza.

ZIMBABWE - Chitungwiza Residents’ Trust on Tuesday appeared before the Parliamentary Portfolio Committee (PPC) on Local Government, Public Works and National Housing on behalf of the residents. Chitrest had been invited by the committee to give the resi...
Share via
x
More Information