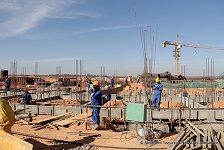 Lekula replaces Pepe Meijer who, after 28 years of service, has reportedly taken a break from corporate life.

In a statement, PPC group said in line with the revised strategy of transforming PPC into a world-class provider of materials and solutions, its reporting structures at group executive level have been realigned to better suit its growth ambitions.

“We are pleased to announce the appointment of Njombo Lekula as the MD of International Operations.”

Lekula is an engineer by profession and holds an MBA from the University of Stellenbosch.

Having joined PPC in 1990, he has over 20 years of experience and has held various operational and management positions within the company, including executive group services. He joined PPC Zimbabwe from May 2013 in the position of managing director and is a member of the PPC Ltd management committee.

The group said its businesses in Rwanda, Zimbabwe and Botswana were all at an advanced stage and have ambitious plans for DRC and Ethiopia, which requires full time focus at an executive level.

Another exciting development, the group said, was the establishment of a materials business which will “drive cement volumes and solutions through our current subsidiaries, including aggregates, Pronto, Ulula Ash, Lime and potential acquisitions”.

Meanwhile, the group announced that Zimbabwe operations recorded an overall decline in revenues of 4% for the year ending September 30, 2015, whereas domestic volumes grew by 5%.

According to PPC, export volumes have consequently halved to 9% of overall volumes, while price increases in the local market remain muted.

PPC said construction of the $85 million 700 000 ton per annum mill in Harare was proceeding well. It added that the project was 50% complete and rail siding contract 32%.

The company said plant commissioning was expected towards the end of calendar 2016 and that will enable PPC to improve use of its existing labour force as key staff members will be drawn from staff at Bulawayo and Colleen Bawn operations, it added.