ZIMBABWE – An action-packed event is expected at Private Lounge on February 25 when Jah Prayzah and Suluman Chimbetu share the stage, organisers have said.

The two musicians will be performing at this exquisite venue during a show running under the banner, ‘Friends Forever Concert’.

The organisers, however, said some of the local entertainers have shown their interest to be part of the gig since it was announced.

“We are foreseeing an action packed event that should not be missed,” said Joe Mentro.

“A number of artistes have applauded the move by Suluman and Jah Prayzah and are interested to be part of it.

“So we are urging fans to gear up for great experience. We will communicate all the developments as time progress,” he said.

The musicians are known for attracting bumper crowds whenever they share the stage, the same situation expected on February 25.

“We have a new approach this year; we want a situation whereby fans feel the value for their money and that is what we are working on for this show.”

Jah Prayzah and Sulu camps said they are looking forward to a big event.

They are currently sampling new songs which are expected to be part of their forthcoming albums.

“The event is on and we are looking forward to it,” said Jah Prayzah’s manager Keen Mushapaidze.

“This should be interesting news to our fans; it’s been long since we shared the stage with Jah Prayzah.

“Fans should look forward to something interesting on the day and we will have time together (with Jah Prayzah) on stage,” said Joe Local from Sulu’s camp.

Meanwhile, Jah Prayzah will hold his welcome party at The Volt (formerly Book Café) on Thursday.

Dubbed pre Valentine show, the lanky crooner will give away 50 autographed DVDs of Jerusarema. 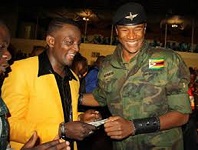 Prayzah and chimbetu on same stage

ZIMBABWE - An action-packed event is expected at Private Lounge on February 25 when Jah Prayzah and Suluman Chimbetu share the stage, organisers have said. The two musicians will be performing at this exquisite venue during a show running under the banner,...
Share via
x
More Information
x