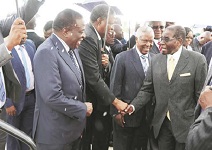 ZIMBABWE – African Union chairman, President Mugabe arrived here yesterday to preside over the 26th Assembly of the African Union that is scheduled to tackle a broad agenda centred on women’s empowerment, infrastructure development, food security, peace and security and the post-2015 development agenda among other issues.

The President will this weekend hand over the AU chairmanship to Chadian leader Mr Idriss Déby Itno after an eventful year in which he revamped how the continental body does its business.

President Mugabe, who for about half his tenure at the helm of the AU was also Sadc chair, left Harare for Addis Ababa, Ethiopia on Thursday morning and was received at Bole International Airport by Tourism and Hospitality Industry Minister Walter Mzembi, Foreign Affairs permanent secretary ambassador Joey Bimha, chief diplomat to the AU Ambassador Albert Chimbindi, Ethiopian minister of Transport Workneh Degebeyehu and embassy staff.

President Mugabe will join some 50 Heads of State and Government and/or their representatives for the Summit themed “2016: African Year of Human Rights with a Particular Focus on the Rights of Women”.

The Summit runs from January 30 to 31, with President Mugabe presiding over the opening ceremony and directing proceedings until his successor takes the reigns.

During his year at the pinnacle of continental politics, President Mugabe introduced a raft of processes and decision making-systems that improved the AU’s effectiveness.

Chief among his accomplishments has been steering the AU towards financial autonomy by self-funding a significant proportion of the bloc’s budget.

Prior to his ascension to the chairmanship, President Mugabe was already on record decrying the fact that the bulk of the AU’s operational budget came from non-African donor sources, a situation that potentially compromised programme implementation.

The outgoing AU chair is also credited with giving impetus to Agenda 2063, Africa’s socio-economic transformation blueprint for the next five decades.

His efforts at engendering peace and security throughout the past year were also apparent, and it was during his tenure that Mali’s government and Tuareg rebels signed a peace accord.

This was also the year that China’s president Xi Jinping came to meet AU members and pledge assistance worth US$60 billion.

Reflecting on President Mugabe’s tenure on the eve of the Summit, Foreign Affairs Minister Simbarashe Mumbengegwi said, “Under his chairmanship, he has been able to inspire the continent to accept that we have to tax ourselves a bit more. Member states must contribute more so that we will be able to pay for our programmes and projects.

“Now, that’s a very big step from the under 40 percent that the member states of the African Union are contributing.

“In fact, when it comes to programmes, they are contributing zero. All contributions of member states go towards operational costs, running costs. All programmes are funded by donors, which, therefore, means only those programmes which donors want are implemented.

“They will not fund programmes that we want, but what they want. So, this was a very important decision for the continent and it was very much spearheaded by the President, he pushed it through the Summit.

“In fact, the current subscriptions for member states have gone up considerably because benchmarks have been determined to achieve the percentages I have just referred. The figures have gone up; in our case we are paying almost double what we used to pay . . .”

And he also painted a glowing picture of the breath of fresh air President Mugabe brought to what are usually dour and formulaic summits.

“The richness with which he chaired the meeting of both Sadc and the African Union was absolutely amazing. The humour  . . . Usually, these meetings are half empty, with people outside, talking, conversing. But during his chairmanship, the meetings were always packed in case one missed something. And indeed, (the meetings) were so rich.”

“Look, he has kept this country very safe. Despite Zimbabwe being a very small country it has done a lot for other countries on the continent.

“Look at South Africa for instance, the ANC would have taken longer to achieve its freedom without the help of Zimbabwe.

Zimbabwe also helped Mozambique when the Renamo tried to destabilise. Zimbabwe also went to help the DRC and Angola.

“President Mugabe has always been there to keep the peace not only in Zimbabwe, but the continent.

“His legacy is that he is a peaceful man and he has always been there to defend the interests of the common man all over the continent. His Pan Africanist credentials cannot be put in doubt.”

In the weeks leading to the 26th AU Summit, President Mugabe has received deputations from African countries to discuss the meeting’s agenda.

President Mugabe assumed the AU chairmanship at the 24th Summit on January 30, 2015, taking over from president Mohamed Ould Abdel Aziz of Mauritania.