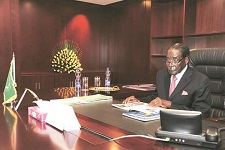 ZIMBABWE – President Mugabe‘s second bite of the cherry as African Union chairman was full of his overarching presence, wisdom and embodiment of the ideals and values of the founding fathers.

Between May 22 and 25, 1963, Heads of State and Government and representatives of 32 African countries gathered in Addis Ababa, Ethiopia at a conference which culminated in the founding of the Organisation of African Unity (OAU).

Also in attendance at this historic occasion of pan-Africanism was Cde Robert Gabriel Mugabe, then representing Zanla.

The country had not yet gained independence and President Mugabe was in attendance as an observer from the Zimbabwe liberation struggle.

When one looks at the composition of the current AU, President Mugabe is the lasting member who was witness to the formation of the OAU and remaining individual who understands and carries the values and ideals of the founding fathers of the organisation.

President Mugabe is the personification of the institutional memory of the African Union. His historic term, which comes to an end this week — a rare second bite of the cherry — was full of his overarching presence, wisdom and embodiment of the ideals and values of the founding fathers.

During his acceptance speech as Chairman of the African Union in Addis Ababa last year, President Mugabe reminded the delegates of where the continent had come and what was left to be done to achieve the dreams of the founding fathers of the organisation.

“I still recall, quite vividly, the palpable collective resolve, dedication and commitment of our forebears, to unite and free our continent from the twin scourges of colonialism and poverty.

“Our freedom and the socio-economic progress, we have thus far attained, are ample testimonies of the correctness of our forebears’ vision,” he said in one of the many consistent postulations about the values of the African agenda,

At the AU summit in Accra, Ghana in 2007, President Mugabe heaped praise on the founding president of Africa’s first independent country, Dr Kwame Nkrumah, saluting his ideology and vision for a united, pan-African continent.

“Nkrumah was a great African personality whose ideology must be preached to Africans irrespective of one’s political ideology.

“After 44 years when Nkrumah called for a united government, some African leaders are still calling for a gradual approach. The time for a union government is now,” he said

President has not been lost to the significance of the continent’s luminaries — one of whom is Mwalimu Julius Nyerere — and has called for his recognition and iconisation.

Just this week, a book on the life of the late President Nyerere, “Julius Nyerere, Asante Sana, Thank you, Mwalimu” was launched in Harare.

In the foreword, President Mugabe writes: “At the first assembly of the Organisation of African Unity (OAU) in Addis Ababa, Ethiopia, in 1963 which I had the privilege to attend as the leader of a liberation movement, Mwalimu Nyerere was one of the visionaries who founded the continental body. But he went a step further when he offered to host the OAU Liberation Committee in his capital, Dar es Salaam, and that is where liberation movements went for diplomatic support, for materials, logistics and training.”

The great admiration and honour that President Mugabe has for the founding fathers is the similar reverence and praise with which Africa should bestow upon him. A champion of the promotion of the African, he has continued to tirelessly fight for the full political, social and economic independence of Africans, particularly in the face of a Western neo-colonialist agenda.

President Mugabe has shown his commitment to the pan-African agenda and the promotion of the African in his home country and his continent.

Under his leadership, Zimbabwe has led thriving land reform and indigenisation programmes, which were aimed at correcting the institutional injustices of the colonial period, which left black indigenous Zimbabweans out of the economy.

Africa and the AU are fortunate to have had President Mugabe as the chairman of the continental body as not only did he rub shoulders with the great men who founded the organisation but he has continued to be guided by those principles that these men followed.

As Africa prepares for President Mugabe to handover the chairmanship of the AU in the coming days, the continent must cherish the lessons of this seasoned statesman and continue to seek counsel from the man who is himself at par in stature with continental giants such as Nkrumah and Nyerere.

It is therefore not a surprise that there are reports that African ambassadors in Addis Ababa, Ethiopia and African Union commissioners want President Mugabe to get a second term as chairman or be given a supreme role to help guide African leaders.

That will be befitting an honour.

ZIMBABWE - President Mugabe‘s second bite of the cherry as African Union chairman was full of his overarching presence, wisdom and embodiment of the ideals and values of the founding fathers. Between May 22 and 25, 1963, Heads of State and Government and...
Share via
x
More Information