The president of Zimbabwe, Robert Mugabe has collapsed after suffering a heart attack while on holiday, media reports claim on Wednesday, January 13, 2016.

Sources report that the Zimbabwean president is in critical condition after being taken ill while on holiday with family and friends.

Mugabe was once caught on camera when he tripped at a function.

Express Uk reports that emergency preparations are now to be in the works in case the 91-year-old leader does not recover.

The latest questions surrounding Mugabe’s health come after he was said to have died in 2014.

Reports at the time varied from saying the veteran leader was seriously ill, to that he had actually passed away.

However, it was later confirmed that the Zimbabwean leader was just spending two weeks in Singapore.

Sources say that at the time he was forced to deny that his trip was for prostate cancer treatment and his lieutenants dismissed the rumours as baseless.

He ended weeks of speculation over his health by stepping out in public to mourn his 78-year-old sister Bridget, who died in Harare after three years in a coma.

President Mugabe flanked by his Nigerian and South African counterparts.

The Zimbabwe government has called the story of the president’s ill-health a socio-media hoax.

“You cannot doubt that there will be a story on the president’s alleged death every January,” presidential spokesman George Charamba told Herald newspaper.

Charamba blamed the ZimEye news website for starting the rumours. “This is the way the website seeks to improve its hits in order to get dirty money… There is a financial incentive to the grim lie,” he added.

The newspaper said stories about Mugabe’s health emerges each year when he took his annual leave outside the country.

Mugabe has ruled Zimbabwe, formerly called Rhodesia, since the country’s independence from Britain in 1980.

Since 1980, the country has been hit by several financial crises which lead to one of the worst incidences of hyperinflation in world history. The aging President has also been accused of gross human rights abuses, including the massacre of as many as 30,000 Matabele in the mid-1980’s.

His rule has seen the death, imprisonment, and exile of numerous political dissenters.  Given his advanced age, many are curious as to who he will choose as his successor.  Some have speculated that his wife, Grace Mugabe, may be a leading contender to replace Mr. Mugabe after his retirement or death. 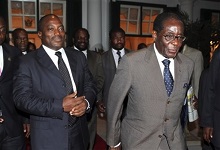 The president of Zimbabwe, Robert Mugabe has collapsed after suffering a heart attack while on holiday, media reports claim on Wednesday, January 13, 2016. President Mugabe reportedly suffered a heart attack and slumped in Singapore Sources report that the...
Share via
x
More Information
x