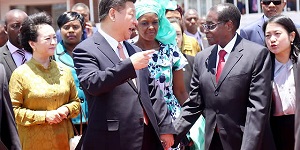 Speaking to journalists while bidding President Xi farewell at Harare International Airport, President Mugabe said the Chinese leader’s visit was phenomenal and Zimbabweans were overjoyed about it.

He said relations between Zimbabwe and China had reached a new high following the State visit.

“On behalf of Zimbabwe, I want to say how overjoyed we were to receive as a our guest President Xi Jinping and his delegation,” he said.

“Although their stay was brief, the essence of the visit was phenomenal and shall always be remembered by us in Zimbabwe. The Chinese and Zimbabweans are excellent friends, friends not just today, friends that have established their friendship back and our future will always be on the path of that. We’re all-weather friends.

“But our friendship is now much more than that — there being those economic agreements where China will assist Zimbabwe to develop economically. We want to thank you for that generosity. We shall always be friends forever and we should consolidate our friendship.”

During his two-day stay, President Xi and his Zimbabwean counterpart witnessed the signing of 12 landmark agreements between Zimbabwe and China – two of which are private sector driven.

The deals covered areas such as aviation, telecommunication and infrastructure development.

For that economic gesture, President Mugabe paid gratitude to the Chinese for continuing to stand by Zimbabwe.

The economic rescue package, which covers several key sectors, comes as the country is reeling under the devastating effects of illegal sanctions imposed by Western countries.

In his address to the journalists at the Harare International Airport, President Xi said he was satisfied by his visit to Zimbabwe which is the second by a Chinese President since independence.

The first visit by a Chinese President to Zimbabwe was in 1996 by President Jiang Zemin.

“Your Excellency President Mugabe and Mrs Mugabe, the Vice President and government officials, I want to thank you for the warm and sound reception you and your country accorded me and my delegation,” he said.

“I want to thank you for those warm sentiments and I’m satisfied by this visit.”

President Xi said he hoped that the Forum on China-Africa Cooperation starting in South Africa today would be a resounding success.

“We’re going to meet again at the Africa-China Summit in South Africa and I hope it’ll be another resounding success,” he said.

President Xi left the Harare International Airport around mid-morning for South Africa where he will undertake a State visit and attend the Forum on China-Africa Cooperation.

Before his departure, he met Chinese embassy staff and nationals resident in Zimbabwe in a closed door meeting at a local hotel.

President Xi visited a wildlife sanctuary near the Harare International Airport before his departure.