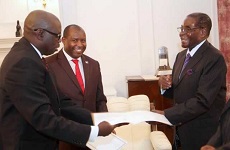 President Robert Mugabe yesterday met a special envoy from Burundi President Pierre Nkurunziza at State House in Harare where the African Union chairperson was appraised about political developments in that country.

Briefing journalists soon after a two-hour meeting, Chief-of-Staff in the Office of President Nkurunziza’s office, Major General Everiste Ndayishimiye said he came to brief President Mugabe on political developments in Burundi ahead of the African Union summit to be held in Addis Ababa later this week.

Burundi has been in the spotlight after it rejected a proposal by AU to send troops to Bujumbura to protect civilians in the wake of the death of 400 people and displacements of more than 200,000 owing to hostilities.

The hostilities have been spawned by President Nkurunziza’s decision to seek a third term as some opposition parties protested against the move arguing that he was in violation of the two term limit provided for by that country’s constitution.

President Nkurunziza has on the other hand argued that he started serving his second and final term before the provision of term limits in the constitution.

But Maj Gen Ndayimishe said President Mugabe had indicated that the issue of Burundi would come up for discussion at the AU summit.

“You know there’s a meeting which is going to be held in Addis Ababa. He told us that they’ll discuss these issues. We’ve confidence that they’ll know the reality and they’ll not consent to send troops in Burundi,” said Maj Gen Ndayishimiye.

Asked why Burundi was refusing to accept deployment of AU troops, Maj Gen Ndayishimiye said there was no need for that because there was peace prevailing in that country.

He said it did not make sense to deploy foreign troops when Burundi had more than 5,000 security forces on peace keeping missions in several countries like Somalia.

“Burundi is protecting other countries. How can you send other troops to protect Burundi. In my view, AU can send other troops in Somalia and Central Africa to help them restore peace quickly. But for Burundi, we send troops to other countries because we are enjoying peace. If we had no peace we could bring back our forces but now there is no need to bring back our forces because those that remain in the country are working well,” said Maj Gen Ndayishimiye.

“We’ve more than 5,000 troops in Somalia. We’re assisting Central Africa with more than one battalion, the police are also in Sudan, Haiti, Mali and its known by everyone. So there’s no need to send troops to Burundi to protect Burundi when we’re protecting other countries.”

He said the deaths of more than 400 people were as a result of criminals, something he said was even common in some developed countries.

“What we’ve is ordinary criminality and the police and the army are dealing with that situation. Every country has criminals and Burundi is faced with that. Even in the United States, they’ve criminals who kill people in classrooms. In Burundi we didn’t see anyone who is shooting in schools. They kill some people to steal, attack families to steal, so it’s ordinary criminality that we’re faced with,” he said.

Ndayishimiye said government was busy unifying people after the end of election mode.

“You know when political parties are preparing for election they try to divide the people so that this group can support them, but after the election the main duty of the government is to unify and reconcile people. Now that’s what we’re doing and is going on well. We put in place a commission for national dialogue which’s working well and we hope that in few months everything will be normal,” he said.