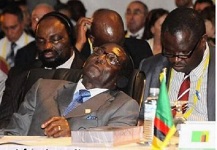 ZIMBABWE – For a long time, the question of who will succeed Zimbabwe’s President Mugabe has remained a most difficult puzzle, both within the country and outside. It still is. But the resolution may be more imminent than ever, due to a combination of rapidly developing events. It is a few weeks to his 92nd birthday, and President Mugabe’s legs are no longer what they used to be. Not a terrible thing to happen at his age, but they have serious implications for Zimbabwe.

In the second part of his 35 years as leader of the country, there has been constant dire speculation on President Mugabe’s health. Usually, the speculation heightens during his December-January holiday.

Beyond mere guesses, events of recent past have led credence to the fact that President Mugabe’s health and state of mind is not what it used to be. In the past year, President Mugabe, at various times, fell, stumbled and was immobilized whilst trying to walk – all in full public view.

At the G20 Summit in Turkey in November 2015, President Mugabe, who attended it as Chairman of the African Union, showed great difficulty as he gingerly walked the short distance from his car to the door of the meeting venue. It was the most recent of the awkward situations that mirrored his physical degradation.

During the India-Africa Summit in October 2015, President Mugabe was helped by summit host India’s Prime Minister Narendra Modi to maintain his balance as he almost fell backwards whilst mounting a one-level dias to the podium to shake hands with Prime Minister Modi.  The host helped and steadied him to walk back, down the podium. About a month earlier on September 15, President Mugabe read the wrong speech at the opening session of parliament in Harare. He read it out entirely without realizing the mistake. It was a speech that he had used for his state-of-the-union address on August 25. In February, President Mugabe fell on his knees and hand as he came down a podium after addressing supporters at the airport in Harare on returning from an African Union Summit in Ethiopia where he became Chairman of the African body.

All the incidents were disseminated widely on social media, in photos and video. Their impact was direct and official explanation and denials did not alter the facts.

President’s Mugabe health has served as the proxy indicator that fuels the intensity of succession discourse in Zimbabwe and in the outside world. In 2008, President Mugabe affirmed his president-for- life desire when he said: “Only God who appointed me will remove me, not the MDC, not the British.” The Movement for Democratic Change or MDC was a once strong opposition party but which has withered into factions through co-opting, violence, internal differences and repressive actions by the ruling Zimbabwe African National Union-Patriotic Front (ZANU-PF) party which has been in power since independence of the country in 1980.

Any leading official of government or the ruling party who has ever being touted as a possible successor to President Mugabe had fallen by the wayside. Until she was ousted from her position in 2014, first female Vice President Joice Mujuru, 69, seemed like the chosen one. She had impressive preparation, access and support from President Mugabe. Mujuru was in cabinet by age 25. A firebrand nationalist of the ZANU-PF, highly educated, thoroughly mentored by President Mugabe himself, she was Vice President for ten years. In a move spearheaded by first lady Grace Mugabe, Mujuru was accused of a plot to kill President Mugabe, expelled from government and party, and branded as arch enemy. She is busy putting together a group called Zimbabwe National African Union – People First (ZANU-PF), a play on the ruling party’s name. Her party will oppose President Mugabe’s leadership.

At some time in the past, current Vice President Emerson Mnangagwa, 60, was seen as the anointed next leader. Mnangagwa has held various cabinet positions since 1980, including head of security under President Mugabe. He became Vice President in 2014 to replace Mujuru.  Mnangagwa has maintained that succession was not an issue for discussion. In response to a member of parliament who raised a question about President Mugabe’s health, Mnangagwa said: “I can assure the MP that the President is healthier than him.”

In 2014, President Mugabe appointed Phelekezela Mphoko, 75, as a second Vice President, but politically junior to Mnangagwa. The action obviously weakens any assumption of hierarchy of succession. When President Mugabe travelled abroad with his wife for his annual leave in December, Mphoko assumed the interim position for several weeks before handing over to Mnangagwa. It would appear that no Vice President was to be seen as directly in line for the highest office.

The first lady, Mrs. Grace Mugabe is said to be frantically preparing herself or somebody of her choice to become the next president. In less than two years, she has acquired enormous powers both in the party and in government. She became head of the women’s wing of ZANU-PF, which conferred on her a position in the cabinet. She has become exceptionally outspoken at political rallies and in public events. She has established herself unequivocally as the mouth-piece of the president.

Rising stoutly in defence of her husband, Mrs. Mugabe, 50, said that he was fit. In obvious recognition of his frailty though she was quoted as saying: “We are going to create a special wheelchair for President Mugabe until he rules to 100 years, because that is what we want.” She added that she was prepared to push the chair.

The ruling party is internally being dismembered by the succession issues. President Mugabe has appealed often at recent party meetings for stronger cohesion and unity. Party cadres and members are lining up behind Grace Mugabe and the Vice Presidents.  Recently, the President called on security forces not to join the factions in the party.

Ahead of the presidential election of 2018 all leading voices – the first lady, the two Vice Presidents and ZANU-PF officials  – said that President Mugabe would be the people’s choice. He has been nominated as the party’s candidate to stand for election. He will be 94 years old.

But his legs, the locomotive appendages that help humans to maintain gravity on earth, will receive closer attention, when and if President Mugabe appears in public forums in 2016. And the legs may well impose the imperative of choosing another leader for Zimbabwe.

Makinwa is a communication for leadership entrepreneur based in South Africa and Nigeria.

I will step down if I lose — Mugabe

President Mugabe's legs and how the mighty fall by Bunmi Makinwa

ZIMBABWE - For a long time, the question of who will succeed Zimbabwe’s President Mugabe has remained a most difficult puzzle, both within the country and outside. It still is. But the resolution may be more imminent than ever, due to a combination of ra...
Share via
x
More Information
x