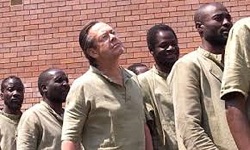 ZIMBZBWE – Although more than 1 500 inmates are confined within the walls of Harare Central Prison, the majority of them are not spared from following trends in the world’s most loved sport-soccer.

The prisoners formed their own teams and they also play competitive games which gave birth to the formation of a league.

Names of popular football clubs, locally and internationally, have also found their way into the jail and they also command a huge following.

Incarcerated soccer players, both professional and non professional, has also found comfort in those teams where they endeavor to fulfill their dreams.

The league ended some weeks ago with Siwela scooping the top goal scorer award with 15 goals.

Other teams that were in the league are Dynamos, CAPS, Academics, Technical Rovers, Orlando Pirates, Gunners, Barcelona and Plumnut.

“We also play competitive soccer here. There is talent among these prisoners and the games are quite competitive.

“We ended our season some weeks ago and AC Milan were the log leaders. Each team has its own supporters.

“Soccer has a huge following than any other sport here,” said Siwela.

Being in prison is a blessing, says a prisoner Samson Ncube