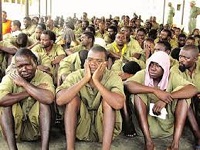 The province send 11 teenagers out of the 19 juveniles who are serving jail sentences ranging from two to four years.

The youngest offender is a Grade 5 school drop-out from Sango Farm who was jailed for four years along with his brother after being found guilty of unlawful entry into premises by a Bindura magistrate.

Although he was not sure about what really forced him into criminal enterprise, the 16-year-old believes his brother contributed into his misdeeds.

“I was sent to jail sometime in January this year. I was with my brother who is also serving a four-year-eight months jail term at Connemara Prison.

“We were arrested after we broke into a certain house in Bindura’s low density suburb. I then went away with a cellphone and laptop.

“My brother stole a DVD player, sub-hoofer and other various items.

“Our aim was to sell them and get some money.

“My brother is married and has some children but he was not employed. I think he was the one who lured into stealing.

“This was my first time to break into a house and steal property,” he said.

The teenage boy rue the day he committed the offence saying he prays not to repeat his misdeeds when he completes his punishment in four years.

Another teenager from Guruve, who is serving a four-year jail term for raping a ten-year-old girl, also rued the day he was arrested.

He said his incarceration left a huge crater in his life which would take him ages to refill.

“I was supposed to write my Ordinary Level examination this year but I failed after Bindura regional magistrate William Billa jailed me for four years.

“I was taken to court facing rape charges. I was said to have raped a ten-year-old girl from my village.

“So far I have written six subjects whilst I am in jail but I have been greatly disturbed.

“I don’t think I will come out with the best results.

“It is difficult to study whilst I am here but I will try my best. I will be writing my last exam tomorrow (Thursday),” he said.

ZIMBABWE - Mashonaland West province has the highest number of juvenile prisoners serving jail terms at the Harare Central Prison. The province send 11 teenagers out of the 19 juveniles who are serving jail sentences ranging from two to four years. Ten pas...
Share via
x
More Information