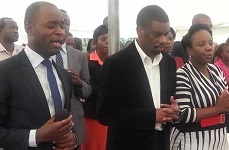 ZIMBABWE – Prophet Sham Hungwe of the ‘anointed’ pens saga yesterday claimed a number of people are coming testifying that the ‘miracle’ worked for them.

The prophet sold pens to congregants towards the Ordinary and Advanced level examinations in October last year claiming that they will help students pass their examinations.

There are reports that a number of people flocked to his church in Highfield last Sunday giving testimonies that the pens are useful.

Contacted for comment, Prophet Sham was not comfortable discussing the issue but confirmed the testimonies.

“I do whatever I do to serve the Almighty God and I am not worried about the criticism. It’s true that the miracle worked, people came to church and gave testimonies.

“Some produced their result slips and everyone who came to church saw it,” said Prophet Sham.

“Parents came with their children testifying that they have passed their examinations.

“There were two students who produced their result slips with 15 points at A Level and they claimed to have used the anointed pens.

“Not only the students gave testimonies, there was also a woman who said she used the pen to write a business proposal and she was successful,” said a source.

“The prophet was even bragging that when they initiated the anointed pens, they received a backlash but now people are coming.

“God really worked wonders and the doubting Thomases were silenced.”

The prophet, who is the founder of House of Grace International Church, went to sell soil to congregants early this year.

He claimed the soil was anointed and would change people’s lives.

ZIMBABWE - Prophet Sham Hungwe of the ‘anointed’ pens saga yesterday claimed a number of people are coming testifying that the ‘miracle’ worked for them. The prophet sold pens to congregants towards the Ordinary and Advanced level examinations in O...
Share via
x
More Information